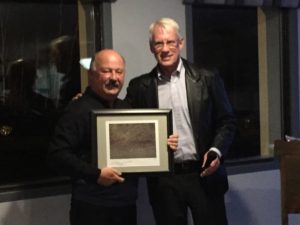 A tribute dinner to recognize the dedication and council service of the past eight years was held on Nov. 19 for retiring HRM Councillor Barry Dalrymple. At the event, organized by Danielle Deveau and MLA Bill Horne and held at the Waverley Legion, community groups were on hand to recognize Dalrymple. There were speeches and presentations, such as this one from Allan Billard, the Emcee of the event, of a Sherman Hines photograph of two Canadian Geese, to Dalrymple. (Healey photo) 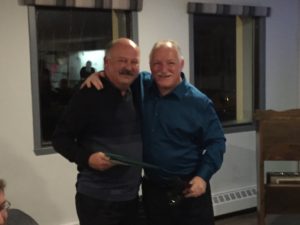 Liberal MP Darrell Samson made two presentations of certificates recognizing former Fall River HRM Councillor Barry Dalrymple—one on behalf of himself and a second from Prime Minister Justin Trudeau. They were handed out during a tribute dinner organized to honour Dalrymple, held Nov. 19 at the Waverley Legion. Among those in attendance were members of community groups that were assisted by Dalrymple as well as MLA Bill Horne, who helped organize the event along with Danielle Deveau, and current riding representative Steve Streatch. (Healey photo)