FALL RIVER: It was a fun night for those who crammed into the Cafetorium at Lockview High, and for those who were brave enough to get up on stage at the traditional Mx. Lockview.

Mx. Lockview- formerly known as Mr. Lockview- is a fundraiser for the Fall River-based school’s Prom Committee, and is one that most Grade 12 students look forward to. This year they had just two weeks to put it together, and everyone involved did a great job.

From watching it in the crowd one wouldn’t know it was done on such short notice.

Elijah Boulton charmed the judges enough with his rapping–and other skills–to be announced by Mr. Lockview 2016, Lewis Coverdale, as Mx. Lockview 2017. 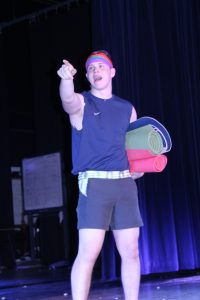 The participants had a treasure trove of antics they put on display for the crowd from swimming; to guessing the correct answer in a match game; to answer emcees Mark Firth and Alex Bujold’s questions during the introduction part of the night; and showcasing the talent they have to wow the judges into picking them.

Liam MacCormick also won the fan favourite award as chosen by a selection of cheers from the crowd.

Mx. Lockview raised an estimated $1,300 for Prom, organizers said on the morning of June 2.

Reporter Pat Healey stopped by to take the event in, and he came away with some great shots that can be found here. There are some videos to from different parts of the night, which can be found on the Video section of our website as well.