FALL RIVER: Olivia Chute would water ski on Third Lake behind her family’s Fall River home year-round if she could.

She says her inspiration to take up the little known sport of water skiing is not far from her most days—her mom, Andrea Hawkins.

“My mom had water skied when she was a kid and introduced it to me at a young age,” said Chute. “I started water skiing at six just on our lake.”

Chute said at nine-years-old, she attended a water skiing camp that was held on the lake behind her home. There she learned how to trick ski. She has been supported by the Nova Scotia Waterski Association.

“It’s really what I like the most,” the bubbly youngster told The Laker. “I think it’s really just a nice sport. I really love it.”

Trick ski sees the person, like Chute, do tricks where you turn backwards, rotations on the wake, and sometimes there are flips. There are also toe turns where you have your foot in the rope and you make yourself turn that way.

The Georges P. Vanier Junior High School student is trained locally by Canadian waterski record holder Claudia Currie, while in Florida Canadian-born Drew Ross trains her. Chute was scheduled to head down Oct. 28 to train in preparation for representing Canada at the Pan American water ski championships in Mexico from Nov. 14-17.

She talked about a training chart in her bedroom filled with many goals they had set for the summer season.

“There’s a lot of goals we had to set and a lot of work we had to do,” said Chute. “I finally made it to nationals and won gold. I thought it was pretty special and something I can remember for the rest of my life.”

Being new to competitions, Chute wasn’t sure if winning nationals would be attainable. In her first pass, she had a fall but regrouped and refocused during the second pass to earn gold. That brought her name to the attention of the Team Canada coach. She was selected to compete as part of the four-person Under-13—she’s the only girl—team at the Pan Am championships.

“I’m really excited and happy to be on the team,” she said. “I was really honoured to be selected. I can’t wait.”

Chute said when she received word she made the team, it took some time for her to comprehend the news.

“I couldn’t really believe it,” she said. “It took awhile for it to sink in.

As she took off her Team Canada coat under a warm October sun before heading out for a demonstration, Chute spoke about how her friends gave her big hugs when she told them about her accomplishment.

“They were really happy,” said Chute.

She said her teachers at GPV have been understanding—and very helpful—as she juggles competitions and school.

“They’ve given me lots of work to get caught up on while I’m away,” Chute said with a smile. 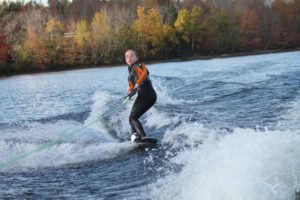 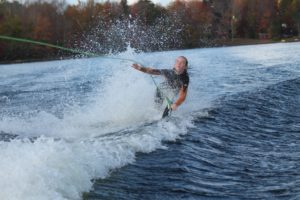