Home Business Getting an inside look at Canada’s ships 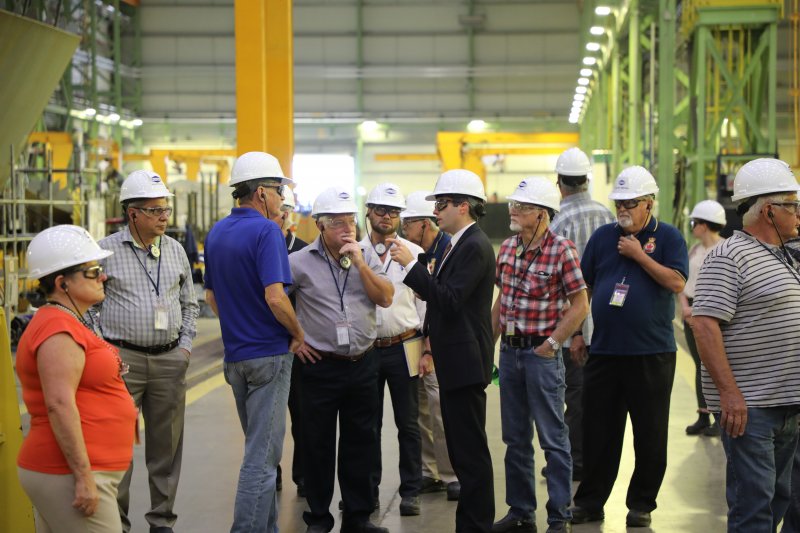 HALIFAX: Street size, the Irving Shipyard in Halifax looks impressive. However, it takes going on-site to really appreciate the sheer size of the operation.

When you actually walk through the doors of the facility next to Halifax Harbour any thought of it being small are thrown off the ship as you realize the large scale of the development, and why it’s such an economic driver for N.S.

On Sept. 6, the Halifax Shipyard welcomed MP Darrell Samson, the Liberal representative for Sackville-Preston-Chezzetcook, about a dozen Veterans from the riding he represents, and the lone media invited to the tour — The Laker. Irving is currently building the Arctic Patrol Ships.

“We had a great tour taking about an hour as we went through all the different sections, seeing parts of the ship being built,” said Samson in the entrance to the facility. “It was an outstanding experience.

“For the Veterans that joined me, some of whom worked on Navy ships in the past, it was quite the experience.”

He said the Vets identified key areas they saw on improvements in building of the ships with the key one being the advances in technology and the working environment.

Samson said the tour was key to share with individuals on the ground what is happening at the shipyard.

He said the shipyard generates a big economic impact on not just the province, but the riding of Sackville-Preston-Chezzetcook itself. Four-hundred and thirty residents of the riding are among the more than 2,200 employed by Irving Shipbuilding in Halifax, a factoid Samson was unaware of until informed.

“We often forget that and talk about the Shipyard and we think about people from Halifax and Dartmouth, but there’s a lot of people working here from Eastern Passage, Gaetz Brook, Porters Lake, Preston, Fall River, and Sackville,” said Samson.

Currently, employees are hard at work on the HMCS Margaret Brooke inside the facility.

Before we all head in for the tour Sean Lewis, Director of Communications, talks to the group about what they do. The Halifax facility is 400 metres in length and 46 metres high.

“We’re the most modernized shipbuilding facility in North America,” said Lewis, adding the company spent $415 million to update the Halifax and Burnside facilities.”

He explained the process for how things come together. All the steel that they use comes from their facility in Burnside.

“When the steel is brought over here, it’s already ready for it to be worked on,” he said. “Everyday, multiple times a day, there’s steel coming across the bridge for the work packages our workers have to work on.”

Legion member Yvonne LeDuc from Gaetz Brook was mesmerized by what she saw.

“The half ship at the end of the tour, that was the best part,” she said. “You could see right from the stern up to the top. It was fabulous to see.

“I was really quite impressed.”

As we wrap up, Lewis talks about several new programs that Irving is starting aimed at employment—one of those for former veterans of the Canadian Forces. That seemed to intrigue several of those on hand.

“They have the clearances, they understand the protocol and hard work involved,” said Lewis. “We think there’s a perfect opportunity for us to be leveraging that more.”

Samson mentioned the programs as he wrapped up his spontaneous interview.

“There are some new programs that Irving are holding which are important to communicate,” he said. “One of those is hiring Veterans; a new initiative to hire more African Nova Scotians and youth. Lots of good things are happening .”

He said seeing is believing and that’s what those who participated in the tour did.

“It was great to see it ourselves because it’s one thing to hear about it and see it on TV, but when you’re here seeing what’s happening on the ground, it’s exciting.”

All I can say is after I left Irving I was still in awe after getting an inside look at the shipbuilding process underway and why it’s an important part of our economy in N.S.