BEAVER BANK: The incumbent councillor for Middle/Upper Sackville-Lucasville-Beaver Bank officially threw his name into the ring on Sept. 6.

Brad Johns announced on his facebook page that he would be indeed be seeking re-election for the seat on Halifax Regional Municipality council in the Oct. 15 municipal election. Johns will seek residents support over that of Kevin Copley and Lisa Blackburn for the seat.

“Although I had found the last term initially a bit of a challenge personally, the past year and a half has been wonderful,” said Johns.

In his facebook post, Johns said he is asking residents to continue to support him so he can support them.

“Although many great things have happened throughout District 14 over the past four years, I still have projects underway that I’d like to conclude, as well as a few new issues I’d like to focus on,” he said, pointing to the controversial ditch tax as one of those issues.

Johns said he seldom asks residents for assistance with much, however once every four years he does request they support him politically.

“It has been an honour and privilege to have had the opportunity to represent the residents of Middle/Upper Sackville, Beaver Bank, and Lucasville over the past four years,” he said.

He noted, as in the past with municipal elections, he does not accept financial donations from developers, special interest groups or residents during elections, however he was looking for residents’ assistance volunteering to door knock, making phone calls or by allowing a small election sign on their lawn.

“It means getting residents involved to find solutions that others overlooked and keeping people informed along the way,” said Johns. “It means being able to look at the big picture while still addressing the needs of individual residents. It means putting the residents and community of District 14 first, before anything else in the municipality.

“I have a proven track record of doing these things and my pledge to residents is to continue to listen, take action on your behalf, and get results.” 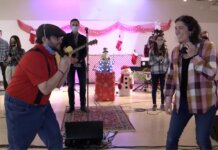