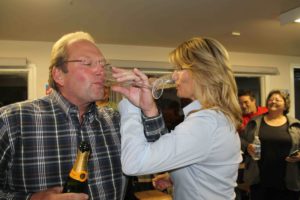 Steve Streatch, who threw his name back in the ring after losing out to Barry Dalrymple four years ago, took 37.9 per cent of the vote (2,245 votes) over Cathy Deagle-Gammon, who had the support of Dalrymple. Deagle-Gammon claimed 1,790 votes to finish second. Veterinarian Trevor Lawson was third with 1,064 votes. Colin Castle (395 votes), Steve Sinnott (263 votes), and Alison McNair (160 votes) all were a distance back.

Streatch said early on there were some nerves as he and supporters followed the election from inside his Waverley campaign headquarters, across from the fire hall.

“The anxiety level has gone down from what it was earlier,” Streatch told The Laker at about 8:50 p.m. “The excitement level is starting to go up.”

In his victory speech inside his headquarters, Streatch said the win was four years in the making. He told many of his team that he was proud of their efforts. He was defeated by Dalrymple in 2012—a move he said was the right one as he went through cancer treatment.

“It’s been a long wait, but were back with a vengeance,” Streatch said. “I’m very proud to be the new representative for Waverley-Fall River-Musquodoboit Valley.”

“Obviously I’m disappointed, but it was still close,” she said. “It’s definitely a journey I would do again.”

Look for more on the results next week on The Laker website and in the November issue.