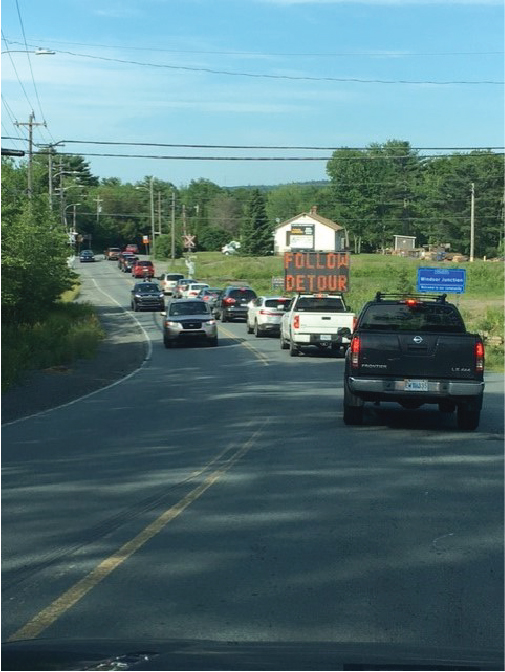 WINDSOR JUNCTION: The closure of the Fall River Road bridge has led many residents to find an alternate route, and that has meant long waits to leave the community along the Windsor Junction Road and Cobequid Road.

This frustration has left many residents and those who are passing through the community angry at the lack of proactive thinking from HRM Traffic on the impact the closure of what is known as the McQuarrie Bridge would have on the small community and the intersection.
One of those residents upset is Kevin Hayes.

“My main concern is the gridlock experienced at evening rush hour at the intersection of Cobequid Road and Windsor Junction Road,” said Hayes on July 21. “Coming unexpectedly upon stopped traffic after ascending the hill on Cobequid coming from Lower Sackville, it’s a blind crest, no visibility (means) no advance warning. And the protracted delay because oncoming traffic is unwilling to adopt a stop and go approach without explicit directions to do so.”

Hayes has grown weary of the logjam of traffic on his usual route. So, like others, he has found an alternate route which has added to the traffic congestion on another busy road—Beaver Bank Road.

“After receiving a response from HRM traffic that they have no plans to fix the evening snarls at this intersection, I have adjusted our evening route to entirely avoid this area,” said Hayes on July 21. “We are now contributing to increased traffic through the First Lake Drive area and Beaver Bank Road beyond Stokil to access Windgate Drive.

“If HRM officials are not willing to take action, you have to take matters into your own hands.”

All Hayes and others are looking for is something to alleviate the problem.

“Temporary stop signs at the problem intersection would at least force all motorists to adhere to a structured ‘give and take’ solution,” said Hayes.

Councillor Barry Dalrymple said the complaints to his email and voicemail on the bridge has tapered off compared to what he received before the bridge replacement work started.

“The emails have dropped tremendously which means to me that an awful lot of people are fine with what they see going on,” he said. “For the most part, traffic isn’t horrendous in all areas except the intersection of Windsor Junction Road and Cobequid Road.

He said he has about 15 emails from residents about the traffic logjam at the intersection in question.

“Now I’ve been over there about 30 times, morning, noon and night, but I haven’t been there at morning rush hour at

“I’ve been over there a few times at supper hour and the wait has been at most a five, six-minute wait.”

Dalrymple addressed suggestions, such as the one made by Hayes. He said those suggestions aren’t necessarily a help. If one all of sudden creates a three-way stop or puts temporary traffic lights, people aren’t used to them so will continue through them, creating the possibility for an accident.

“There’s no absolute guarantee those would make things better, and instead could make the situation much worse on the busiest of the three roads,” he said.
It’s not all bad, Dalrymple said, although some motorists feel Rocky Lake Drive and Cobequid Road is a freeway.

“The pinch points in Waverley are far better than expected, but I will note people going through Waverley have to figure out the speed limit is 50, not 80 or 90 like they have been doing. It’s 50. While the traffic flow through Waverley has been good, people have to slow down.”

He said the backups he has seen are no worse than what those endure on the Hammonds Plains Road or Kearney Lake Road.

“If there was a solution out there that would guarantee things would be both better and safer, we would do it,” said Dalrymple. “If the traffic situation gets worse, the traffic people are monitoring it, I’m monitoring it. We would certainly be prepared to step in.

“Right now, while there are some backups and time delays which is always frustrating and I completely understand that, there’s no guarantee of anything that would make it better.”
phealey@enfieldweeklypress.com