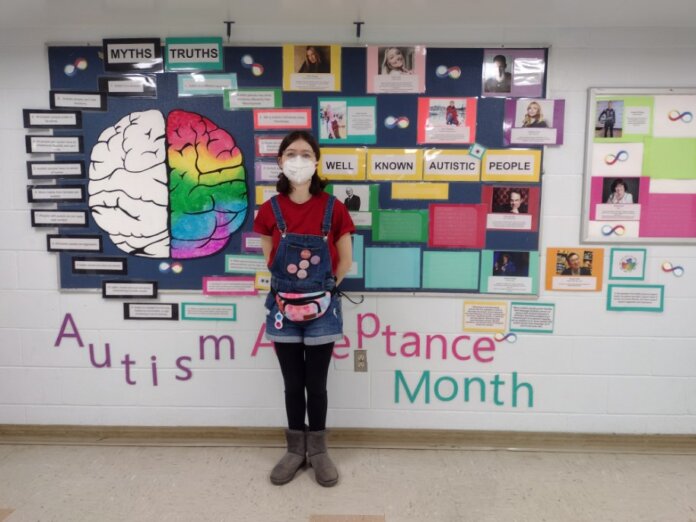 FALL RIVER: Naphtali Tucker’s mission this past month was to ensure students at two local schools were aware that April was Autism Acceptance Month.

Naphtali wanted to teach people, specifically those around her age or who were her school mates, that autism doesn’t always look the way people think it does. She’s done that through Brainy Buttons, which can be found on Instagram.

During the month she spread that awareness by creating bulletin board displays for both Georges P. Vanier Junior High School in Fall River and Holland Road Elementary School in Fletchers Lake.

Naphtali donated two books for Holland Road and one for Georges P. Vanier for their libraries on autism.

“I gave the teachers a resource binder full of information and buttons for all the staff,” she said in a recent email interview (done when I was down with COVID).

She said it took them about three weeks to do both boards, binders, design and make the buttons.

The Grade 8 student felt it was important to do this at the schools because children should learn about autism and neurodiversity young so that the world is more accepting.

It makes me happy that people are listening to what I have to say and learning about autism because it means they care,” said Naphtali, responding to being asked what it meant to have such a good response to what she was doing.

How did she come up with such a cool name as Brainy Buttons?

“My Aunt helped me come up with the name,” she said. “It’s a good name because I make mostly buttons about neurodiversity so….the brain.”

Naphtali added that a dollar from every donation for a button goes back into more boards for schools, resources for teachers and book donations.

To find out more about Naphtali and Brainy Buttons, check out her Instagram at @brainybuttons or email brainybuttons@gmail.com .