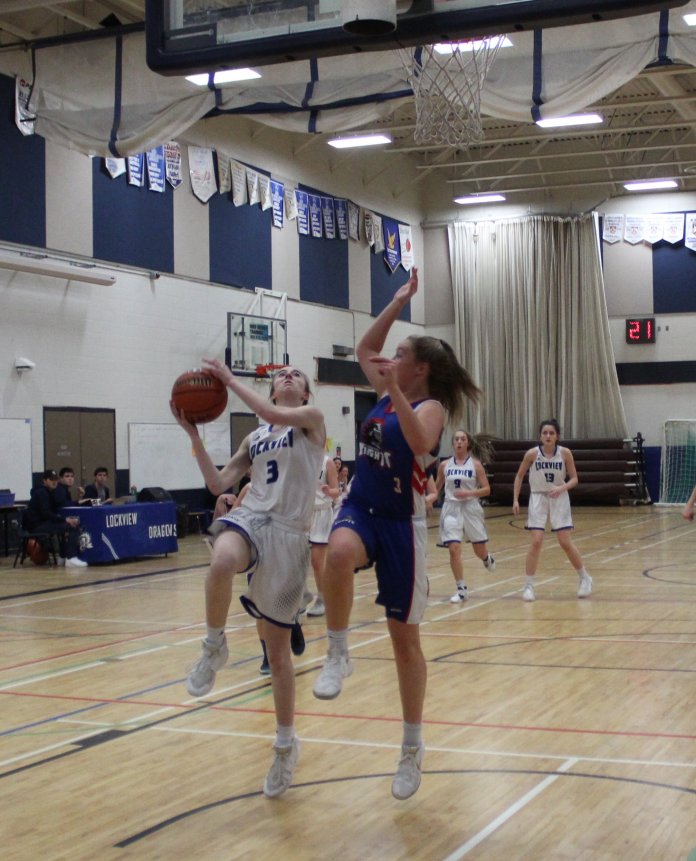 FALL RIVER: Camryn Giddens of the Lockview Dragons comes in to put the ball up for a basket, only to have the hand of a Millwood defender block the shot, thwarting the scoring chance much to the delight of many in the crowd who erupted in cheers at the result of the play.

Lockview’s Grace Lancaster gets a shot off before two Millwood Knights defenders can stop the ball from getting up to the basket for two points in the Dragons 70-34 victory. (Healey photo)

Lockview High’s Emma Foye, left, and Ellie Lancaster, right, battle no. 23 with Millwood Knights for the ball during the home opener for the Dragons. LHS won the game 70-34.

This play ended in a battle with both players holding the ball and the officials giving possession to the Knights.

Isabel Goncalves of the Lockview High Dragons (no. 7) tries to setup a scoring opportunity during a Metro High School girls basketball league game against Millwood in Fall River on Dec. 4. (Healey photo)

Lauren Fry of the Dragons (no.9) makes a pass to a teammate close to the net around a Millwood Knight defender on Dec. 4 in a high school girls league play at Lockview High. (Healey photo)

N.S RCMP warn those who threaten to contaminate officers with COVID19...

Pat Healey - March 31, 2020
DARTMOUTH: Members of the Nova Scotia RCMP have reported being threatened in the context of the current COVID-19 pandemic.