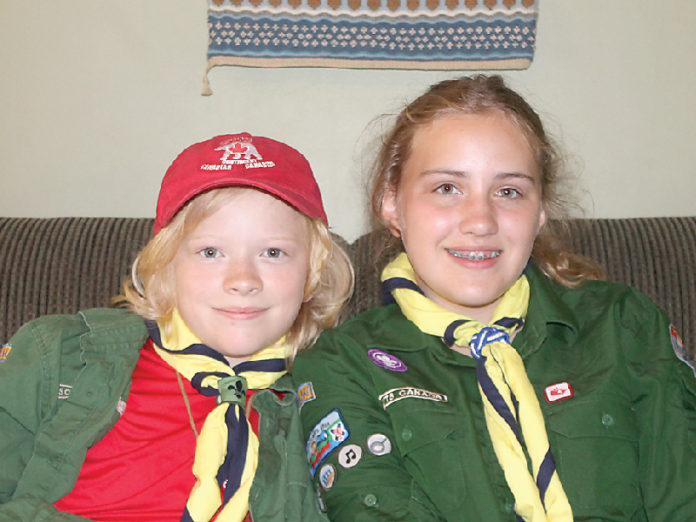 FALL RIVER: Three scouts with the 1st RiverLake Scouts had the time of their lives as part of the Canadian contingent that just returned from Finnjamboree, held in late July in Finland.

Claudia Saunders, and siblings Libby and Danny Gruchy were among the group from the Fall River area who were part of the 167 that represented Canada at the jamboree.

Claudia’s brother, Callum, also participated. More than 17,000 scouts from around the world were in attendance at the July 20-28 event.

Claudia, speaking via Skype from England where she was with family, said the jamboree was fun and there were a lot of people in attendance.

“On one of the days, the day that was a visiting day for the Finnish families that lived nearby, we got to go around and see all the activities we couldn’t do because they were for the age group above us,” said Claudia. “We found the agility bunny, which jumps over all the jumps. That was neat. I’ve never seen that before.”

At their Fall River home, the excitement was still clear as day for both Libby and Danny.

“It was amazing,” said Libby, a student at Georges P. Vanier Junior High. “It was a once-in-a-lifetime experience.”

The two enjoyed getting to experience the jamboree as siblings. As most brothers and sisters do, they do get on each others nerves.

“He would bug me sometimes,” said Libby as Danny gave a smile.

It was Danny’s first jamboree. He said he met a lot of new friends.

“As an international jamboree, and it being my first one, it was crazy, interesting, and fun all at the same time,” said the Ash Lee Jefferson School student.

Libby said the whole event—minus the ceremonies as they were all done in Finnish—were memories she will remember forever.

“There was this whole tree house that the Swiss made, it was all wood and ropes,” she said. “That was so cool.”

Libby and Danny’s family joined the contingent after a trip with their family to Sweden. Their dad was with them in Finland.

Claudia, who stayed with a Finnish family while at Finnjamboree, said they got to do yoga on a paddle board while on the lake, and went in a dragon boat.

“We had to build a house out of stuff, like cardboard, textile, and bits of trees, that would fit two people at least,” she said.

She did some visiting to Helsinki and an island which was an old fortress.

“There’s one side of the fortress you’re not allowed on as the Finnish military still uses it,” said Claudia.

What did she take away from the experience? That she can be independent.

“I spent more time away from my parents than I have before and I met lots of new people,” she said. “I have a new friend that lives in Finland so that’s cool.”

With Finnjamboree being her first one and having such a good, learning experience, she’s ready for the next one.

Libby thinks some of her friends maybe a tad bit envious at what she did during her summer.

“Some of them maybe jealous,” she said with a ear-to-ear smile. “Other kids should join scouts so they can get opportunities like this.”