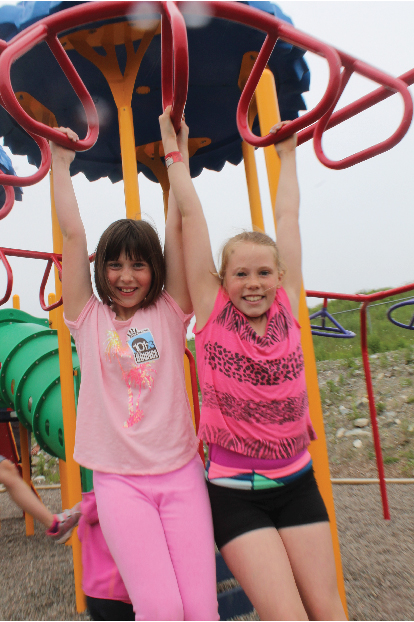 WAVERLEY: The weather may have been dreary, but the smiles on the kids at the new playground and park in the Spider Lake subdivision were big enough to create their own sunshine on June 29.

In between spurts of much-needed showers, the ribbon was cut to officially open the new Bunchberry Park at the end of Bunchberry Lane in the Spider Lake subdivision in Waverley.

The park comes complete with a paved sports pad, playground, and walking trail.

Councillor Barry Dalrymple was on hand to assist the kids in cutting the ribbon. Before that though, he spoke of the history in what led a thought some four years ago into becoming reality, despite roadblocks initially from HRM.

“It’s an absolute joy to be here,” said Dalrymple as he began his short speech. “I’m sure you all, especially you guys (looking at the many kids), are wonderfully thrilled.

“Coming here today, talking to a lot of people here most have said thanks. It’s greatly appreciated, but the thanks comes from us to you because of such a big group you have.

Because you were so passionate, so strong HRM changed its policy.”

He said that policy used to see groups have to raise one-third of the money, and maybe HRM would kick in one-third and the province would add one-third.

“That would let us build just a playground,” he said. “You guys changed that because of the force of the group in being absolutely relentless, HRM changed the process last year.

“Now for all of us in our suburban and rural communities, we all go on the list and when you get on top of the priority list, HRM pays for the entire playground.”

Joanne McNeil is one of the organizers who dedicated their time to working towards the end goal.

“This is the beginning of a community that is all together,” said McNeil. “We were all spread out before and the kids had no place to play, no sidewalks, couldn’t walk to a park. Now they have a wonderful place to play.

“The whole neighbourhood can now play together. It’s very exciting.”

She said in 2012 she sent an email to Dalrymple and Steve Streatch, the two who were running then, and asked how they could help if they were elected. She got two answers.

“Barry’s answer was pretty incredible, and as soon as he was elected in October 2012, by November we started a community meeting. Over half the neighbourhood attended. That showed how interested they were in this project.”

She said there were 12 people on the committee that formed. They surveyed the community and even asked the kids what they wanted it to look like.

“We had quite a few hurdles at the start, but finally got the approval last summer thanks to all Barry’s pushing and help,” said McNeil. “Every time they (HRM) asked us to do something, we did it. In the end, they didn’t know what else to say as we did everything they asked.

“These are the three things the community wanted.”

Dalrymple told the residents that already this year two other playgrounds will be built and paid for by the HRM in neighbouring communities because of their push.

“Craigburn Drive in Waverley, just up the road, are about to get an $80,000 playground completely paid for and Fall River Village is getting a playground, also paid for fully by HRM because of the process that you guys did,” said Dalrymple. “Not only did it benefit this subdivision, but most of my district and most of rural/suburban HRM. This is a thank you from me to you. It’s a big deal.”

The sports pad was built without a fence, as HRM would not cover that cost. However, Dalrymple said he has some money left in his capital account.

“We’ll get permission to put the fence around the sports pad,” he said.

Emma Mccara and Sophie Wells both agree the playground and park is something that will see more children outside this summer.

It means they have a place to go to with summer here.

“We now have a place to play,” said Mccara. “It’s in our community and we can have fun instead of sitting at home inside.”

The two said the playground should mean less time in front of the TV or computer/tablet screens for them and their friends.

“It’s the perfect place to play at,” said Wells.

Dalrymple summed up what everyone in attendance was feeling just by pointing out the kids.

“The smiles on their faces say it all,” he said.