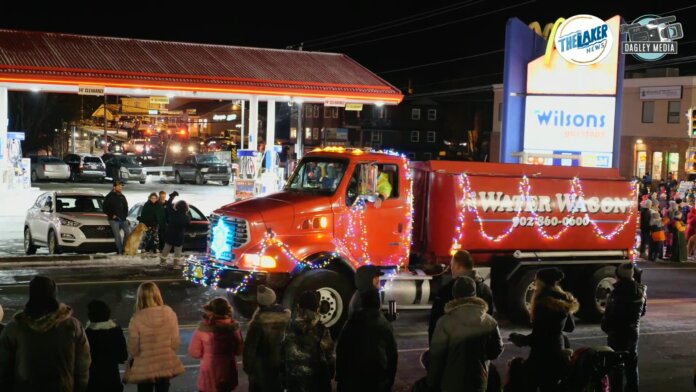 The parade and its upwards of 30-plus entries/floats from local school sports teams and businesses as well as two government representatives of the area, MLA Brian Wong and Councillor Cathy Deagle Gammon.

Deagle Gammon and new puppy Charlie hopped on board the Laker News entry, a golf cart provided by Aerotec Engines.

From the looks of the crowds along Lockview Road, Fall River Road and Hwy 2, there were hundreds-plus who came out to get into the Christmas Spirit.

Even Buddy the Elf made a return appearance, yelling to the crowd that Santa was here.

Santa Claus and Mrs Claus concluded the parade, waving to the many young boys and girls in the crowd.

Station 45 Fall River volunteer firefighters were in the parade at the start and rear, while Halifax District RCMP were traffic control. The roads were closed for a short time as the parade made its way from start to end.

The parade is held to ring in the Christmas season but also to collect food donations for the Lions Christmas Express.

Organizers wish to thank everyone for the support of the parade and coming out to watch. They wish all a Happy Holidays!.

Here are some photos from the livestream video as taken and shot by Dagley Media: