FALL RIVER: Darrell Samson heads into his second term as the MP representing Sackville-Preston-Chezzetcook, and his schedule is going to busy.

Samson, a Fall River resident, was appointed by Prime Minister Justin Trudeau as Parliamentary Secretary to the Minister of Veterans Affairs and Associate Minister of National Defence.

Parliamentary secretaries provide an important link between ministers and Parliament, working closely with their colleagues to deliver real, positive results for all Canadians. They will help advance government legislation, engage directly with Canadians on key government initiatives, and represent the government in Canada and international issues. They are not members of Cabinet and do not play a formal role in the Cabinet decision-making process. They support their ministers, but overall responsibility and accountability remains with the minister. 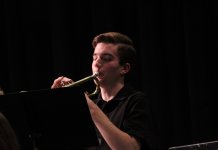 PHOTOS: Tunes for the season at LHS