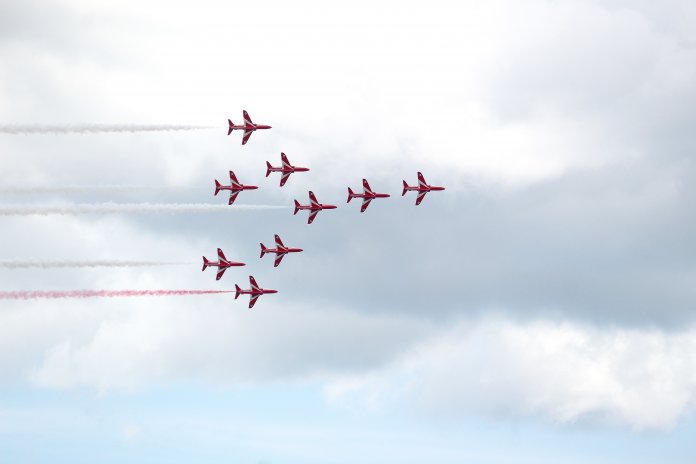 HALIFAX STANFIELD: Royal Air Force Red Arrow Flight Lieutenant Gregor Ogston may have the best seat to get a view at all North America has to offer.

And what he and his 10 comrades saw as they came in for landing at Halifax Stanfield Airport on Aug. 7 in preparation to kickoff their North American Tour has left the first year pilot excited to see the rest of Canada.

“There’s so much to look forward to for our tour,” said Ogston, standing alongside one of the jets they fly. “Canada, and being right here in Halifax right now, is great. Our first show in Halifax, we’re finally here. We can’t wait to get started.”

He said as they came in to Halifax, he was mesmerized.

“The view of the Nova Scotia coastline was great,” said Ogston. “To be able to smoke out red white and blue over Canada was a real high point.”

The Red Arrows were in N.S. for several days before wrapping up their stay over Halifax Harbour with four fly pasts before thousands on Aug. 11. The stay was part of Air Show Atlantic’s promotion for their Aug. 31-Sept. 1 show at CFB Greenwood.

Ogston said the training begins in November with a formation team of three, then move to five and gradually build up to the famous diamond nine. From there it ramps up to the level they are at, which is perfection if they can do that.

As they left Goose Bay, NL in the pouring rain and headed for Halifax, he had a viewpoint of the coastline and scenery leading into the airport, which was beyond words.

“For us, we’re a visual display team so we need good weather at low altitude so people can see what we do,” he said. “We have three shows we can do at different altitudes so if the weather is poor we can bring the show down to a different level.”

The Red Arrows put on an impressive display to wrap-up their stay in Halifax with four flybys over Halifax and Dartmouth, wowing the thousands on the ground and the water all to watch them. They now head to Ottawa and elsewhere for stops on the tour.