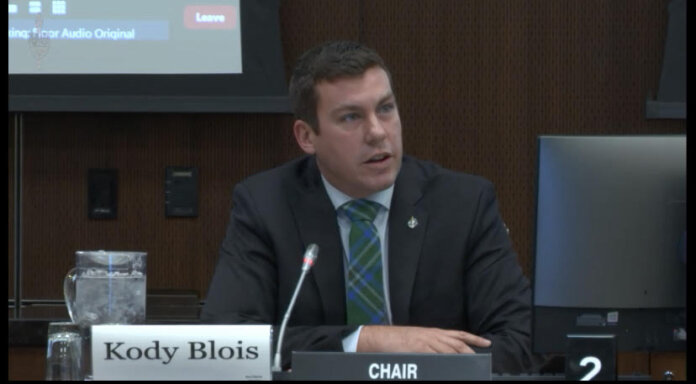 EAST HANTS: Kings-Hants Member of Parliament, Kody Blois, has been named chair of the Liberal Atlantic Caucus and chair of the House of Commons Standing Committee on Agriculture and Agri-Food.

MP Blois was appointed chair of the Atlantic Caucus during last week’s caucus meeting on Dec. 8 in Ottawa. His first meeting in the role of chair took place virtually yesterday, Dec. 15.

“I’m grateful my colleagues have placed their trust in me to represent the interests of their constituents from across Atlantic Canada,” said Blois. “I also want to thank MP Kelloway for being the voice of our caucus since March.”

As chair, Blois is part of the National Caucus meeting agenda and speaks on behalf of all 24 Atlantic Liberal MPs.

After taking on this new role, Blois stepped down as chair of the Liberal Rural Caucus but will remain an advocate for rural issues through his work on the House of Commons Standing Committee on Agriculture and Agri-Food.

Blois was elected chair by committee members from all parties at a meeting in Ottawa, today, Dec. 16. He has been a member of the committee since being elected in 2019.

“I’m thrilled to be named chair of the House of Commons Standing Committee on Agriculture and Agri-Food,” said Blois. “Kings-Hants is the agricultural heartland of Atlantic Canada and I will continue to be a strong voice for the agriculture sector in this new role.”