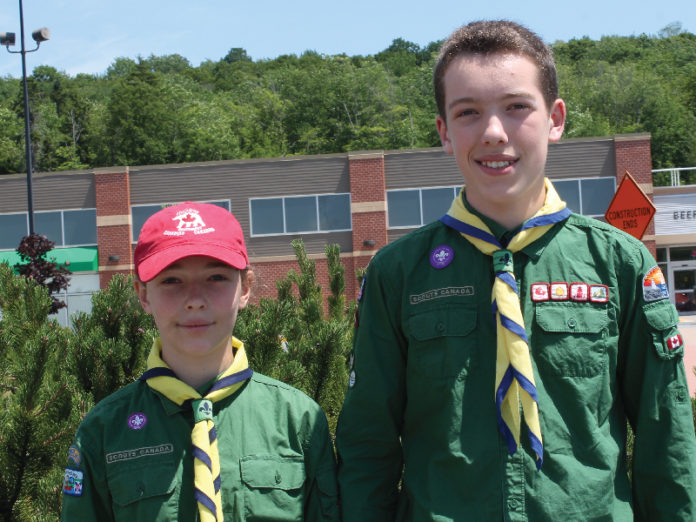 FALL RIVER: A brother and sister are among the six scouts set to head across the Atlantic next week for an eight day trip-of-a-lifetime representing the 1st Riverlake Scouts at Roihu Finnjamboree in Finland.

The July 20–28 event brought more than 15,000 scouts from across the world into one location, with more than 167 Canadian Scouts taking part, says a release from Holmes PR Inc.

For Claudia, who goes to Georges P. Vanier Junior High, this will be her first jamboree. This is just her second year in the organization. She joined because of how much fun she saw her brother having, and because her friend wanted to join as well.

“I’m excited to go because I’ve never been at a jamboree before,” said Claudia. “I’m expecting to meet a lot of people and make new friends. I’ll also likely do things that I can’t do here.”

She said she’s watched videos of Callum from when he went to the jamboree last year in Japan. That piqued her interest even more to get the opportunity to go.

Among some of the activities Callum and Claudia—and the other scouts—will take part in includes wilderness adventures, cooking classes, and an international exhibition. Its goal is to help better foster relationships between Scouts from different countries, while at the same time building life-long friendships.

“Adventures like this help Scouts develop into capable, confident, and well-rounded individuals,” said the release.

Callum, 15, agrees with that statement. He has been in the scouting movement for six years.

He said he hopes to learn a lot during the eight days in Finland.

The two held a dance at the LWF Community Hall as a fundraiser to help raise the needed money to attend the jamboree.

The 13-year-old Claudia said it feels great to be sharing the journey with her brother.
“It’s kind of cool that we’re going together,” said Claudia. “This means we both get to experience it, instead of just one of us.”

She said her friends are excited for her.

“They’re all wondering why they’re not in Scouts if it’s this much fun,” she said.

Claudia is hoping to learn about being more independent on the trip.

“It’ll be my first time away from my parents,” she said. “It’s going to be like a normal Scout camp. The only difference is we’re travelling further, and by plane.”