Isenor, from East Hants, is one of three recipients announced by Hockey Canada recently as winners of the Order of Merit. The other winners are: Michael Penman (Central); and Roy Sakaki (West).

“As a player, coach and administrator, he has had a front row seat to watch hockey grow in Nova Scotia, and today’s game has his fingerprints all over it,” the release said.

A goaltender during his playing days, Garth made the move the behind the bench in his early 20s, guiding a generation of players through the East Hants Minor Hockey Association (EHMHA), including a provincial Peewee AAA title-winning team in 2000 as an assistant.

He took over as EHMHA president in 1991 and began to work his way up the Hockey Nova Scotia ladder, eventually serving as chair of Minor Council from 2008-11, vice-president of operations from 2011-15 and finally president of the Member from 2015-19, working closely with the Hockey Canada Board of Directors.

Garth’s goal, as it always has been, was to welcome as many players to the game as possible. Respectful, considerate and insightful, Garth has long been a champion of the game, and of those who play it 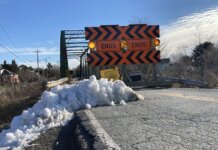