HALIFAX: Ashleigh Marshall might only be in her rookie season with the recently crowned Atlantic University Sport (AUS) women’s basketball champion UPEI Panthers, but she’s played a key role in the team’s success to date.

The Lockview High alum has earned praise from her head coach, Matt Gamblin, for being part of the team whether that’s contributing on the court when called upon to take some of the load off the team’s other players or simply by being a supportive teammate cheering her teammates along from the bench,

“Ashleigh’s positive energy is a big boost to the whole group,” said Gamblin after the team’s semifinal win over UNB Reds on Feb. 29 at Scotiabank Centre. “She’s a happy-go-lucky kid who’s always ready to play, but also just brings a lot of positive energy.”

Marshall’s former coach at Lockview High, Lori Lancaster, is a UPEI alum so there’s a connection between the Dragons and UPEI.

“It’s a great Fall River/UPEI connection that we’re happy about,” Gamblin said with a smile.

During the season, Marshall played 112 minutes over 18 games, or an average of six plus minutes a game, recording 18 points. She was a perfect 2-for-2 from the free throw line.

While Marshall may not have saw the court during the Panthers semifinal and championship final, the Fall River native could be seen pumping her fellow teammates out and high fiving them when they came to the bench for a substitution or timeout.

As the final seconds ticked off the Panthers 78-59 championship win over Acadia, Marshall was grabbing onto teammates on the bench ready to burst onto the court in celebration of the team’s first championship in 22 years.

The smile on her face as the team posed for photos with the banner, trophy and then took pics of each other with the banner was proof enough that she understood her role and was happy to do her part cheering her teammates on while being ready if tabbed to take to the court.

For Gamblin, it’s all about getting the experience for Marshall and other rookies on the team, which graduates just one player of the AUS championship winning roster this year. In other words, it will be a force for years to come as it’s built for long-term success.

“She’s done a great job this year. She knows her role,” said Gamblin, who has known her since she was 15. “Seeing Ashleigh develop has been good and being able to be part of that has been nice. “

Marshall and the Panthers captured bronze at the USports national championship in Ottawa, rallying from an 12-point halftime deficit to earn the victory.

Meanwhile, the game marked the end of Beaver Bank’s Kelsey Rice’s career as an Acadia Axewomen. She had battled concussion issues and other injuries to make it back on court for this season with the Len Harvey-coached squad. She is also an LHS alum.

Error, group does not exist! Check your syntax! (ID: 3) 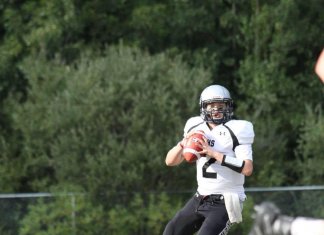 Pat Healey - March 29, 2020
FALL RIVER: A Lockview High School football player knows where he will be hitting the gridiron at next year.

Praising Dr. Strang: Community says thank you to one of their...