Conservative leader says Oct. 3 stop chosen because of geography to other ridings

BEDFORD: Conservative leader Andrew Scheer’s visit to the Halifax-area will provide a boost and kick-start momentum for candidates in N.S., said the Conservative candidate for Sackville-Preston-Chezzetcook.

Kevin Copley, who is vying to unseat Liberal Darrell Samson in the riding, was among the almost 500 people who filled May Garden Restaurant in the Mill Cove Shopping Plaza in Bedford in support of Halifax West candidate Fred Shuman on Oct. 3. They were there to welcome Scheer.

“Having Andrew Scheer come here isn’t just a big boost not only to our campaign , but to Atlantic Canada,” said Copley. “It signifies that Andrew cares about Atlantic Canada, that he’s willing to be present here and support the Atlantic Canada candidates and hopefully our future MPs.”

In a media scrum after the meet-and-greet—one which wasn’t initially planned, but was hastily organized after news of his dual citizenship broke during the event, Scheer was asked why they chose a Liberal stronghold for the event. The seat for Halifax West is held by Liberal MP Geoff Regan, who is also the Speaker of the House of Commons.

“There are a lot of seats across Atlantic Canada that we are confident will become Conservative on Oct. 21,” said Scheer.

“The reason we made the stop here was because of it’s geographic location and that we could be accessed by as many ridings as we possibly could.”

He said it also came down to where space for such an event was available.

Copley was impressed with the turnout at May Garden for the event.

“We were at standing room only and I think we had to turn people away,” he said. “It really shows that people are impressed with Andrew and believe in his positive Conservative vision for Atlantic Canada.”

He spoke about the campaign with 17 days to go, calling it a grind.

“I tell people all the time that campaigning isn’t glamorous, it’s hard work and there’s a lot efforts behind the scenes by people who often don’t get the credit,” he said. “We’ve loved every step of the way.”

Copley was looking forward to hearing questions from residents and the business community at the Oct. 8 FRABA/The Laker Candidates Forum, scheduled for the Waverley Legion. It will run from 6:30-9 p.m., and will be live tweeted (pending Wifi availability) over @TheLakerNews. You don’t need twitter to follow along.

When asked about how the door-to-door canvassing is going, Copley said things have been positive when he’s been on the doorsteps. He has knocked on close to 15,000-plus doors as of Oct. 3, with much more to go.

“The reception has been very good for us at the door,” said Copley. “People are ready for a change. People are a little bit frustrated, and when they see a new face coming around to their door asking for their support their happy to offer it.” 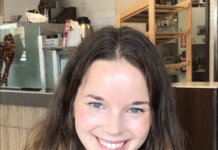