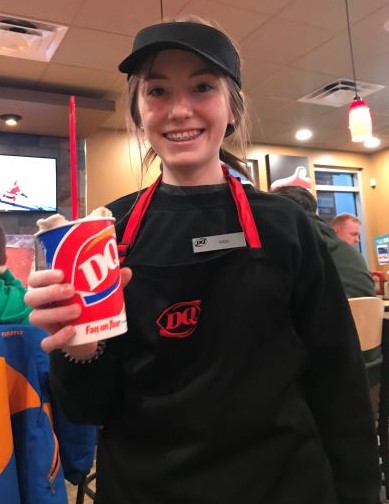 FALL RIVER: It might have been a cold, late January day, but that didn’t stop the Alford family of Beaver Bank from being among the first through the doors at the new Dairy Queen in Fall River as it opened.

The store wasn’t opening until 10 a.m., but 90 minutes earlier the family of three parked outside the store awaiting the opening. They wanted to be the first ones to be served and receive the first Blizzard made by one of the over 20 staff that were on hand to deal with the expected busy opening day.

Before the doors officially opened, the ribbon was cut by manager/franchisee Peggy Rust to mark it’s opening.

A DQ Blizzard mascot was also on hand to greet customers and even went down by Highway 2 where it danced for some motorists showing them the new facility–built by Lindsay Construction—was officially opened.

The first few days of the business being open saw a steady stream of customers coming and go through the doors, keeping the employees cooking and making people’s favourite treats.

Rust said a grand opening celebration is being planned for March 14. More details will be released as the day gets closer.

The Fall River Dairy Queen employs upwards of 45 people—including many youth—from the Fall River and area community. The store is open Monday to Sunday from 10 a.m. to 10 p.m.