BEAVER BANK: August 17 was a big day for one lucky dog in Beaver Bank.

Falkor, who had his front paw amputated earlier in the year after it got stuck in a snare, has a new leash on life with four paws thanks to some Good Samaritans and K-9 Orthotics and Prosthetics in Beaver Bank. Falkor’s human family live in the Tantallon area.

“It’s fantastic,” said Falkor’s owner Chelsea Kruck. “He adjusts just fine without it (the paw), and once he learns how to use the prosthetic properly it’s going to be heartwarming for him and myself.”

VIDEO: Getting used to it

She said the Odd Squad society and Falkor’s previous foster mom, Shannon, had been working for about two months for him to get the prosthetic. Kruck only got Falkor in early July.

“I’ve been working with K-9 Orthotics for about that length of time,” she said.

Many people and businesses stepped up to help cover the costs for the prosthetic, including For the Love of Daisy in Tantallon, while the Bait Shop next to RBC paid the remainder of the cost of what was left on the bill for the prosthetic.

Kruck said she hadn’t noticed much of a difference early on once the prosthetic leg was placed on Falkor, but as the time went on during the stay and media interviews took place one could see he was becoming accustomed to it.

“I’m sure once he can go for longer walks after getting used to it and understands he’s not getting tired after a certain amount of time, he’ll be very happy,” said Kruck as tears swelled in her eyes.

VIDEO: The new prosthetic is on Falkor

Jeff Collins, owner of K-9 Orthotics and Prosthetics, has assisted many dogs in similar situations. While Falkor was a bit awkward with the prosthetic on, Collins said it’s like a baby learning to walk—they’re unaware of what they can do and the weight they can put on their legs.

“With dogs, it’s a natural response, and it’s hard to tell them not to do that,” he said. “Basically, you physically have to grab a hold of them and let them know that you can put the leg down, you can walk.”

The prosthetic leg for Falkor became a reality thanks to the fundraising efforts of Wise Group, a non-profit organization, who raised $500.

Adam Ghazoul, the founder of Wise Group, was on hand as Falkor had his prosthetic leg placed on him by Dr. Jeff Collins, who himself has a prosthetic leg.

“We’re very proud to see Falkor with his prosthetic leg,” said Ghazoul. “We’re happy to help him get to walk again and share his story.”

He said they want to help more dogs like Falkor—and not just in Canada, but across the world. They are already involved in many projects, as listed on their website www.wisegroupcanada.ca.

And if the look on sweet Falkor’s face could speak, it’s easy to see what he is saying.

“Thank you humans for helping me walk again.” 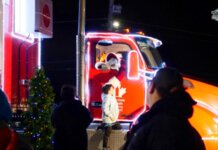