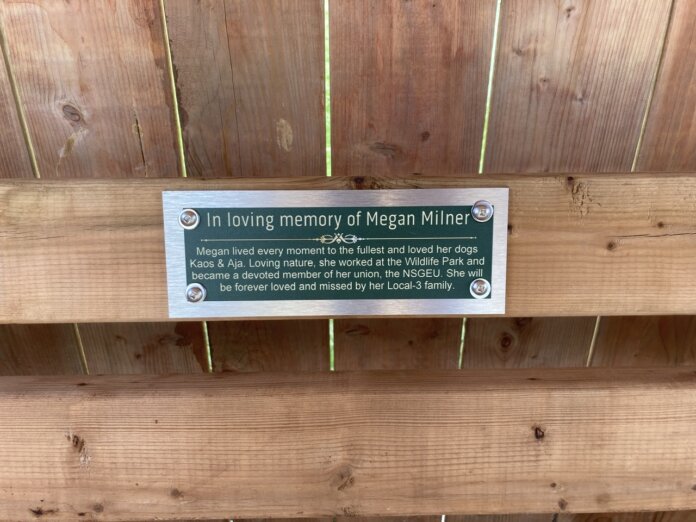 ELMSDALE: A memorial bench in honour of a Musquodoboit Valley woman killed in 2020 was installed over the weekend of June 18-20 in Elmsdale.

According to a post from the Off-Leash East Hants Society, who are a volunteer group that constructed and maintain the Off-Leash East Hants Dog Park behind the Elmsdale Legion, the President and members of local Nova Scotia Government Employees Union (NSGEU) #3 came to the park to commemorate the life of one of their members, Megan Milner, who was a big dog lover and loved animals in general.

Milner died tragically last year after the dog she was walking near Chaswood attacked her, according to Halifax District RCMP at the time. The dog was found deceased a short time later as well.

Milner’s colleagues reached out to the Off-Leash East Hants volunteer board to ask if a memorial bench could be placed in the Park in her honour and offered a generous donation.

The society said they were honoured to be chosen and Megan’s bench is now placed by the Rainbow Bridge in the large park shelter,.

There were several people–and their four-legged fur kids–enjoying the shelter and standing by the bench when The Laker News visited on June 20 to grab some photos of the bench and the plaque on the bench.

With the amount of users who come with their doggies to the park, the bench is sure to get a lot of use.