WELLINGTON: In the face of tragedy, two witnesses to the double fatal motor vehicle collision that took the lives of an 87-year-old man and 15-year-old girl tells the story of a neighbourhood rushing to the scene to help.

Halifax District RCMP, along with firefighters from Station 42 (Wellington); Station 43 (Grand Lake); Station 45 (Fall River); and Enfield Fire, along with EHS ground crews and Lifeflight were paged out to the serious collision shortly before 7:30 p.m.

In a Facebook message to The Laker, the witness—who wished their name not be used—said they were the third or fourth car on scene by Oaken Hills and Highway 2 on June 10.

“By the time we got out of our cars the neighbourhood around there, including Oaken Hills and the people who live near there all pitched in to help those injured,” the witness recounted. “While I was on the phone with 911 the gents around the neighbourhood were armed with household fire extinguishers trying to keep the older gentlemen’s car from igniting while they heroically tried in vain to get him out.”

The witness said nurses who lived around the area, plus his wife who is also a nurse, sprung into action helping the teenagers.

He said that the man, identified as Captain. Joseph Dominix of Fletchers Lake, had already passed away before the flames so suffered no pain. He was driving a 2005 Chev Impalla.

The 15-year-old girl, identified online and in an obituary as Kylie Casey Marie Cooper of Porters Lake, passed away on June 11 at the IWK. She attended Eastern Shore District High School, where she was in Grade 10.

She was one of the four youth in a 2005 Ford Focus. Besides the 19-year-old driver, from Dartmouth, the vehicle also had a 13-year-old girl who sustained non-life-threatening injuries and a 19-year-old man who had minor injuries.

The witness said his heart aches over the loss of two lives in the devastating crash.

“It was sad to know that someone’s grandfather, husband, brother, and uncle pass away in front of our eyes,” said the witness. “It was compounded learning that the young lady from the other car passed away.”

Another witness said they heard the sound of the crash and ran out the front door. He quickly returned to his house as his wife called 911, and he headed back with a fire extinguisher in hand.

“An off-duty nurse was there and quickly triaged the victims and helped those most in need. A neighbor turned off the engine of one of the cars,” said the second witness. “All around, people arrived with water bottles to be refilled to try to stop the flames. A man jumped over an embankment and started throwing up filled bottles to try to stop the fire.

“An off duty RCMP and another medical personal arrived and continued caring for those injured. Cars came down Abilene Avenue with more fire extinguishers as the fire started to get out of control. Many tried to put the fire out. Those who could help, did; those who couldn’t stayed back a respectful distance.”

The witness termed it a very tragic day for the community.

“In the end, it is clear that we live in a community where people choose to run towards people who need help, rather than stand by; where off duty health care providers jump in and try to save lives because they care,” said the witness. “We live in a community where volunteer firefighters, sitting at home, interrupt their lives and speed towards terrible scenes, because they care.

“We have people who work with EHS and RCMP who bring control to a frantic scene as part of their everyday work, because they care. In the end, everyone in those vehicles was surrounded by people who cared, for them from the smoke and flames,” the witness said.

An RCMP collision analyst attended the scene to examine it for evidence. The investigation into the cause of the collision is ongoing. 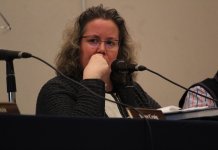