WAVERLEY: Volunteer firefighters will be getting an increase in their honorarium after HRM regional council passed a motion that would up what they receive.

One of the stalwart supporters of increasing the honorarium they get was Waverley-Fall River-Musquodoboit Valley Councillor Barry Dalrymple. The representative on HRM regional council told The Laker on Oct. 9 it was one of several changes he and his council colleagues passed during regional council on Oct. 4.

During budget discussions last year, Dalrymple said his motion was much the same to the one he made towards gaining funding support for Ground Search and Rescue a couple of years ago.

“These are volunteers who give unbelievably, who we ask for the qualifications, the training, all that stuff, we ask a lot of,” he said. “We have no right to ask that kid of stuff without giving back something.

“We do give them an honorarium that helps out with gas, paying bills, and stuff like that, but not near enough.”

So at last year’s budget talks, Dalrymple made the motion to increase the honorarium by $1.1 million a year.

“It’s to recognize their worth and value, to retain the volunteers we have that we are losing, and maybe help recruit some volunteers for the suburban and rural stations where we’re hurting,” he said.

HRM put in $570,000 in this year’s budget to get to the end of March 2017, with $1.1 million set for next year and all subsequent years budgets, said Dalrymple. They will be paid quarterly instead of annually.

Dalrymple said at the time the CAO and council asked if they could put off the motion until the fall so they could find the money sources.

“I agreed to that on the condition that they did go out and find it,” he said. “The fire chief and his staff did up a report, which is just fantastic. They compare our volunteers to others across Canada and even into the U.K. They get into how the honorariums should work, some fixes, how it might help with recruiting.”

He said for $1.1 million in honorariums it equates a savings of $10 million a year.

“If we didn’t have the volunteer firefighters out here, the cost to permanently staff all of those would be over $10 million a year,” said Dalrymple. “That’s only to pay salaries. That’s not to buy the fire stations out here because so many belong to the communities. That’s a very conservative figure.

Dalrymple along with council candidate Cathy Deagle-Gammon visited Station 41 and Station 42 Wellington fire stations on the night of Oct. 4 to pass on the news of volunteer firefighter honorarium being approved.

“I wanted to pass on the news personally to the firefighters to show how much we appreciate them,” said Dalrymple. 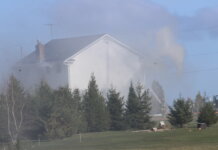