FALL RIVER: The two HRM councillors for the Lakes area both feel council made a mistake when they implemented what is better known as the ditch tax some 10 years ago.

Steve Streatch, the representative for Waverley-Fall River-Musquodoboit Valley, and Middle/Upper Sackville-Lucasville-Beaver Bank Councillor Lisa Blackburn feel there are better options available than what is currently being done.

The storm-water runoff charge—or more rhetorically as it’s know by, the ditch tax—is a levy that has been placed on properties that in Halifax Water’s view contribute to runoff and water management as it relates to their systems in certain communities, said Streatch.

“I do not support the levy,” he said in a Nov. 17 interview. “In my view it is a tax, and I don’t think it has been thought through enough. This whole thing started about 10 years ago.”

He said in 2006 HRM had full control over Halifax Water. The rates and taxes were set by council and applied to water users. In 2006-2007 council decided to allow the water commission to have a mandate to manage its own affairs.

“In other words, they would go to the Utility and Review Board (UARB) and plead their case for rates that would be applied to the users of the system to look after infrastructure costs, upgrade costs, facilities, etc.,” said Streatch. “The whole reason council at the time did that was to spare rural residents from having to share under the general tax rate for those costs.

“In my view, we have gone full circle and we’re right back to the point that we didn’t want to be in the first place.” – Steve Streatch, District 1 Councillor

Streatch said people in rural communities have been “unfairly subjected to charges and levies that we tried to avoid 10 years ago.”

At the Nov. 8 HRM regional council meeting a discussion was held to a similar charge to the ditch tax, affecting a lot of condo/mobile home owners.

“I asked the question to the solicitor because it was put to us that we have no choice but to go along with it because it was a decision of the UARB and that the water commission is doing what the UARB has said they have to do,” said Streatch. “I challenged the lawyer and Mayor. Council always has a choice. I don’t like to be put in a corner and given ultimatums.

Streatch said there are some things that HRM can do to find a solution.

“We can just go along and accept what the UARB decides. That is one avenue,” he said. “We can try to work from within, in other words gain membership on the water commission with members of council like-minded to myself. Or we can seek legislative changes to wrap up the current mandate of the water commission and bring them back under the control of HRM.

“I am not against pursuing that if we do not get a satisfactory outcome that is going to be acceptable by the residents of the former county residents, including those in my district.”

He is at a loss to explain how the issue has been allowed to get to the point it’s at now.

“The problem is when the decisions are not being made by elected representatives, such as councillors or MLAs, and they are being made by an unelected, virtually untouchable body like the UARB you have very little ability to influence other than speaking at a hearing, which usually has slim to no results.

“I would encourage the employees of the water commission to recognize that there is an inequity.”

Blackburn said the discussion was basically council saying “boy, we messed this one up.”

“When they took the storm-water right-of-way charge and started putting it on the tax bills, there were a couple of implications they never saw coming,” she said on Nov. 21. “The two main ones were condo owners being charged for their parking spaces and storage spaces, and the big one that was my concern was the land-leased communities, mobile home parks, the owners. They were charged, even though the park owners were charged as well.

“I saw that as double dipping.”

She was glad they had the discussion and that other council colleagues realized it is working.

“The solution that is currently on the table I’m not sure is a complete fix as it would still see the mobile home park owners charged,” she said. “I don’t want to see that at all as the land owner has already been charged. It’s been paid on that property.”

Streatch said he would rather see the levy wrapped up.

“If you’re going to charge the people tax, then let’s call it what it really is, a tax,” he said. “If we don’t have a level of satisfaction that I feel is fair, then I’m not against pursuing the reversal of the decision council made 10 years ago, to bring the water commission back under the control of Halifax Regional council.” 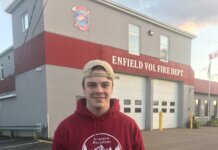