FALL RIVER: The local councillor is impressed and happy with the timely work by Dexter Construction in completing the replacement of the Fall River bridge.

“I think it just finished,” said Dalrymple on Sept. 17.

Dalrymple said he saw crews pouring cement for the last piece of the sidewalk on the Good Day Kitchen & Cafe side earlier in the day on Sept. 17.

“My understanding is that it was to be complete by today, and all of the orange barrels are gone,” he said. “I think the bridge as of today is complete.”

He praised the workers for the job they did.

“They were under-budget, they got the bridge opened sooner than their deadline, it’s a beautiful piece of infrastructure,” he said. “It’s very sharp looking. Compare it to the old bridge with the old black, broken timbers. It’s a huge increase in appearance and safety.” 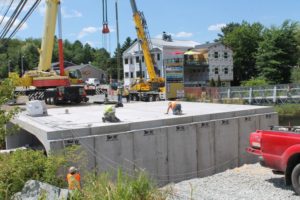 Dalrymple said the bridge being closed did cause people problems during the summer.

“Everything turned out as good as it could have turned out.”