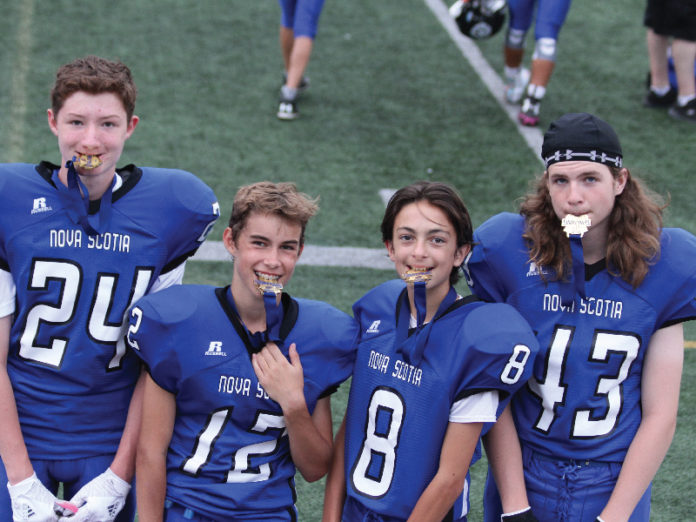 FALL RIVER: Team Nova Scotia might not have had the size of their opponents, but the heart and determination the players on the Under-15 football squad rose to the occasion for the team at the Spalding Cup in Montreal.

The team won the province’s first-ever gold medal at the Spalding Cup U-15 championship, 39-38.

Jonah DeMone of Beaver Bank, and Fall River’s Crater Theriault, Charlie Gould, and Austin Levy were four local players who suited up for Team Nova Scotia. The bluenosers didn’t appear to be given a chance by their opponents given their stature. But that didn’t matter as Team N.S. went 3-0 winning the coveted gold medal.

“I think we made a statement, maybe even surprised ourselves,” Theriault said. “I don’t think going into the tournament we thought we were that good. I think we surprised everyone.”

“Everyone said we were small, we didn’t have anyone that was big and they did,” added DeMone. “We went in and won our first game, which just got us rolling and filled us with confidence.”

DeMone thinks that first win set the tone for the team.

“It definitely did,” he said.

The team had to win the first game to get to the medal round, and then they won the second game which punched their ticket to the championship final.

Theriault, Gould, and Levy all play in the Fall River Dragons football program, while DeMone is in the Bedford Sackville Saints program. He started playing before there was a program in Fall River and has been grandfathered in to the Saints.

“The bus ride home was really fun, everybody smiling,” he said. “It was really surreal.”
Theriault agreed.

“I’ve never been on a team that’s won much before,” said the Georges P. Vanier Junior High Student. “It was really amazing. Everybody was pretty emotional.”

DeMone said it all came down to a one point difference between winning gold and coming up runner-up. It was a nervous final minutes of play.

“The lead switched sides a few times,” he said. “We just had to keep doing what we we’re doing.

“The last minute was the craziest final minute I’ve experienced. They got the touchdown to close the gap, and then we got the ball back for 30 seconds. The quarterback took a knee with 30 seconds left, and the game was over.”

Theriault said his heart was in his throat as he watched his teammates make the final plays.

“I wasn’t sure we were going to be able to drain the clock,” he said. “As we took the knee, and that ended the game I think everybody was a little shocked and excited. We were pretty proud of ourselves.

“It was a happy moment.”

DeMone described the scene as time ran out.

“As soon as the final seconds ran off, we all ran on to the field,” said the 13-year-old. “We were hugging each other and there were tears being shed. We had big smiles on our faces.”

And those smiles still haven’t dissipated even after the long bus ride home to a welcoming of family and friends.