Steve Streatch said the ministerial order for the in-person meetings was modified recently and the city council in person meetings will return, albeit with social distancing measures in place at council quarters.

“I’m looking forward to that,” he said. “The business of council has continued through out this pandemic, unlike the provincial legislature, we have met regularly. Our committees continue to do work, and we redid the entire budget online. The first time ever that we had to do two budgets in one year.”

He said HRM was doing well financially up until the pandemic hit, and then found themselves with a $70 million gap.

“We had to close because we’re not allowed to run deficits or an unbalanced budget, by law,” he said. “We went through the process and came out at the end for the most to deliver our mandate without an increase to taxes.”

Councillor Steve Streatch said an update provided to him by the developer of the Carr Farm development indicates it is moving along in its next steps towards the start of construction.

The Carr Farm project will see the development of five buildings of three and four storey in height and up to 400 units on 46 acres of land on Fall River Road. It would be located across from Mason’s store. HRM Regional Council approved the application 13-2 in a public hearing in Halifax City Hall on March 5, 2019.

At the time it was indicated that before the development could proceed, a traffic and water study will need to be completed before a permit to construct will be issued, council heard.

Streatch said he has been told the final details are being worked on and that developer Glen Clark hopes to begin construction soon. Once work starts, it won’t stop until the development is complete.

“My understanding is that the developer has been working through some of the details and applications,” said Streatch, adding it wasn’t his place to speak for Clark on where they stand in the process. “Things are close to being finalized, and later this fall it is his intention to break ground.”

He welcomed the news.

“It is my understanding that significant considerations relating to seniors’ issues and aging in place have been further put in the plan,” said Streatch. “I think it will be a great addition to the community, and something the older folks who want to stay in this community will now have the option to do so.”

Turf field at Lockview on hold

Before COVID19 hit, Councillor Steve Streatch met with those behind a plan to construct a new all-weather turf field at Lockview High.

“That project is still in the planning stages, albeit slightly delayed due to budget constraints,” said Streatch. “I have spoken to the committee recently and it is my intention to reactivate those discussions and get this project to the top of the list in HRM’s coming calls for proposals as it relates to a new regional artificial field.”

He said the municipality does not look at thing’s community to community but rather regionally within context.

“The Waverley-Fall River corridor is a fast growing area that has no artificial turf capacity,” said Streatch, “so I believe the strength of the local committee, the impact of the petition they prepared, and the fact the municipality is about to embark on the process to consider our next location will bode well for this area.

“I support a construction of this type of turf field at Lockview and will continue to work with the community and the parent’s group to bring it to fruition in the very near future.” 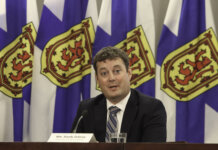