FALL RIVER: Residents should be patient for a few more months as the finalization is done to the tax bills for the Fall River water project, said Councillor Steve Streatch.

The project was completed more than a year ago, however residents have not been informed exactly what their costs will be. That has left many unable to budget their finances yet.

“The water bills have not been issued yet, but they will be coming out later this fall (on your tax bill),” said Streatch. “People should not look at that in a negative. Nobody is in a hurry to get a bill from HRM in any form, but there’s no jeopardy involved.”

He said the COVID19 pandemic and complications have delayed things a bit, including HRM redoing their whole budget. It was estimated the cost for residents along the route of the water line would be $11,500—whether they hooked up or not.

“Within that budget, I was successful in getting $100k from council to contribute towards the Local Improvement Charge (LIC) fund to reduce the pressure on the residents. I feel good about that,” said Streatch. “The bills will be out into November.”

Streatch said talks have started on the water project expansion to other areas that need it, such as St. Andrews Village, Schwarzwald, and Fall River Village in future phases.

“We’re now into discussion for phase three of the project, which will take us into three areas that have indicated clearly they are in need of central water services,” said Streatch.

He said the project has been 20-plus years in the making and is an accomplishment he is proud to have brought to the district. Work on the project had begun under the guidance of Councillor Barry Dalrymple before he retired and Streatch won the seat in 2016.

“I am proud to be the member of council to be able to finally deliver that,” he said. “The water and it’s service is working very well right now.”

Streatch knows other areas in the community which are in desperate need of some relieve from their water issues. He said it would be an HRM-led initiative, with funding partnerships from the province and federal governments.

“I have had a lot of people contact me asking me for the water service to come to their areas, whether that is in Schwarzwald, St. Andrews Village, or Fall River Village,” he said. “There is a process and we have started that.

“Later this fall, my intention would be to petition those areas to gauge a level of interest and the type of system that would need to be designed for them.”

He said the system that was installed allowed enough capacity to support and supply all the subdivisions in the Fall River area.

“Quite frankly, that installation was just the beginning of many good things to come, and many more connections in the future,” he said. 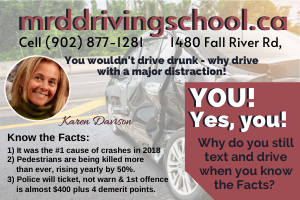