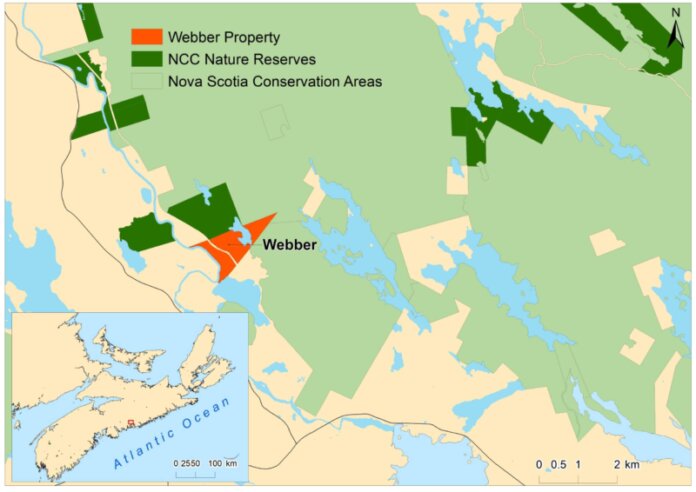 With the addition of this key parcel of land, the entirety of Turtle Lake is now fully protected. A portion of nearby Granite Lake is also protected as part of a larger assemblage of NCC properties.

The wetlands and floodplains along the adjacent Musquodoboit River are important habitat for species diversity and the survival of the snapping turtle (special concern) and bank swallow (threatened) listed under the federal Species at Risk Act. Migratory waterfowl, such as American black duck and common merganser, also depend on these freshwater wetlands.

The property has a rare Acadian (Wabanaki) Forest of which just 5 per cent of this original forest type remains in the Maritimes.  It is made up of red maple, red spruce, black spruce, white pine and balsam fir trees.  The forest also supports rare birds, such as the olive-sided flycatcher (threatened) and the Canada warbler (threatened) listed under the federal Species at Risk Act.

This important land conservation project was made possible thanks to the generosity of private donors. The project was funded in part by the North American Waterfowl Management Plan, the Government of Canada’s Target 1 Challenge Fund administered by the Government of Nova Scotia, the Nova Scotia Crown Share Land Legacy Trust and the U.S. Fish and Wildlife Service through the North American Wetlands Conservation Act.

This announcement showcases how NCC is accelerating the pace of conservation in Canada. In the past two years alone, NCC has influenced the protection of more than 1 million hectares (almost twice the size of Prince Edward Island), coast to coast to coast. Over the next few years, the organization will double its impact by mobilizing Canadians and delivering permanent, large-scale conservation.

In the face of rapid biodiversity loss and climate change, nature is our ally. There is no solution to either without nature conservation. When nature thrives, we all thrive

“Thanks to our donors and supporters, we are pleased for the opportunity to add to this important conservation area in southcentral Nova Scotia. The Musquodoboit River Valley is a special place for wildlife, plants and people, and we are delighted to keep adding important pieces of the conservation puzzle and making sure these sites are here for today and for future generations.” – Jaimee Dupont Morozoff, NCC Program Director in Nova Scotia

“We are pleased to have played a part in ensuring that this beautiful wilderness property, and waterways, will be available for all to enjoy, for future generations. This would not happen if not for the continuing, relentless efforts of the Nature Conservancy of Canada to protect our unique, and incredible wildlands.” – Jane, Ed, and Matthew Webber, Donors

“We know we need to do more to halt biodiversity loss. It is vital that we take action locally, regionally, and nationally to recover Canada’s species at risk and restore our natural areas and biodiversity. This project adds important connectivity for wildlife by adding conserved land that connects to existing provincially protected areas. It is through projects such as this one that we are making progress toward our goal of protecting a quarter of Canada’s lands and a quarter of its oceans by 2025 and working toward 30 percent of each by 2030.” – The Honourable Steven Guilbeault, Minister of Environment and Climate Change

“Land conservation is essential for Nova Scotia’s environmental health, economic growth and prosperity, and ensuring a sustainable future for our province. That is why our government has made a commitment to protect 20% of our land and water by 2030. The Nature Conservancy of Canada’s leadership in our province will provide climate resiliency and benefits for generations of Nova Scotians. I want to congratulate them on their latest land conservation work in the Musquodoboit area and thank them for their commitment to protecting our province’s important natural areas.” –The Honourable Timothy Halman, Minister of Environment and Climate Change