MOUNT UNIACKE: A 27-year-old man was sent to hospital with life-threatening injuries as a result of a serious motor vehicle collision near Highway 101 in Mount Uniacke on April 5.

Cpl. Chris Marshall, with N.S. RCMP, said at approximately 4:45 p.m., police were notified of a collision on a service road near Highway 101 in Mount Uniacke.

Police, Uniacke & District fire, and EHS attended the scene and found a damaged ATV that had gone down a 30-foot embankment.

The driver of the ATV, a 27-year-old man, sustained life-threatening injuries and was taken to hospital by LifeFlight.

Highway 101 was shut down between exits 3 and 4 for a short period of time. 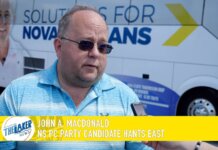