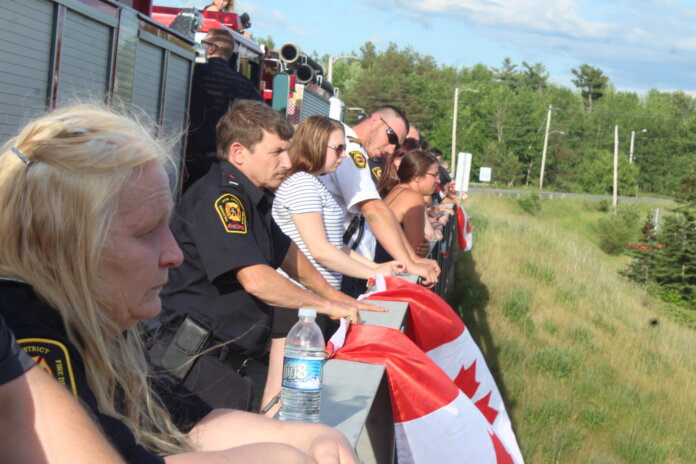 RAWDON: With fire trucks from 16 departments lining the overpasses between the Halifax Airport and Truro, the procession for Sub Lt. Matt Pyke made it’s way along Hwy 102 on a hot summer night.

Led by an RCMP and military police vehicle, and including several processional vehicles it was only fitting that two fire trucks from Rawdon and Gore were at the back end of the procession keeping other traffic at bay as the procession made its way to Mattatall Varner Funeral Home.

In Truro, SLt. Pyke’s remains were removed from the hearse by pall bearers and taken into the funeral home, where there was quiet time for family.

A funeral will be held at a later date.

The mission aboard HMCS Fredericton was Pyke’s first deployment. He was one of the six crew members of the Canadian Armed Forces CH-148 Cyclone helicopter that crashed into the Mediterranean Sea on April 29 during a training mission. All six died.

At the Enfield Legion overpass, Rawdon and Gore firefighters positioned themselves to say goodbye to their friend, and former volunteer firefighter colleague as he passed under the overpass.

There were several Canadian flags being waved, and firefighters with both departments were dressed in their dress wear.

Other fire departments took up position at overpasses at Exit Enfield; Exit 8 Elmsdale; Exit 9 Milford; Exit 10 Shubenacadie; Exit 11 Stewiacke and so on.

It was an emotional time for many of the firefighters who knew SLt Pyke well.

There was about 75 people gathered at the overpass. Traffic was stop-and-go during the short procession, with many motorists very understanding as to why it was stop-and-go.

Further up the road, a construction crew from TIR working near Milford all stood hard hats to their chest as the procession passed by them.

The show of support from everyone on this emotional, exhausting day was well received by the family, The Laker News was told.

For more photos from the procession, please check out our Photo Gallery section.