SCOTIA SPEEDWORLD: Six days before the Jim Hallahan 250, after a runner-up finish in the ReMax 250 at Speedway 660, Cole Butcher hinted post-race he had a good piece for the first Maritime Pro Stock Tour race of the year, set for Scotia Speedworld.

“We’ve been testing there, and our piece has been fairly good,” said Butcher after the race in the Geary Woods. “I’m looking forward to that race.”

Well, on Sept. 12 he backed up those comments, qualifying third and then taking the Nova Truck Centre Pole challenge and falling to last of the 15 cars that took the green flag for the race, held before an almost sold-out (maximum 1,250 fans due to public health guidelines) under sunny skies at Scotia Speedworld.

Butcher started at the rear and by the first caution about 13 laps in he had worked his way up to ninth place. From there he picked off the other racers one by one until he got to the front where the no. 2 of Ashton Tucker gave him a bit of a run for his money and the no. 08 of Nick Naugle battled and kept the driver from Hantsport behind him for bulk of the race, until it appeared his tires started to go away on lap 168.

That allowed Butcher to get by and head to Victory Lane, where Hallahan greeted him as well as Tucker, in his first race at Scotia Speedworld who came second, and Naugle in the Brycon hot rod who was third.

The no. 5 of Brudenell, P.E.I.’s Jonathan Hicken came home fourth while the “Hugger” no 33, a tribute paint scheme to Hallahan, of Jarrett Butcher was fifth. Butcher usually drives the no. 54, but for this race was wheeling the no. 33 orange machine.

Matt Vaughan of Fletchers Lake drove the no. 0 Dexter Construction machine to an 11th place finish, 12 laps down after a flat tire ruined his race early on.

In the TOURSEC Lightning feature, the undercard for the first large crowd event in N.S. under public health guidelines, Carroll’s Corner racer Jamie Dillman wheeled the Pete’za Perfect-sponsored no. 158 to Victory Lane. That came after a hard side-by-side battle with the 106 of Marshall Bezanson of Oldham, who came home second.

Bezanson even being in the feature was a miracle after a huge wreck during practice left his hot rod mangled, but with the help of many teams from the Lightning division and a couple of the Pro Stock teams, he was able to get it pieced back together in quick fashion and safe tor ace.

And Bezanson did just that, almost pulling out the win but Dillman was a tad better.

The Pro Stock Tour will hit the track once more this year on Sept. 26 at Riverside International Speedway in Antigonish. Details are expected this week.

For Scotia Speedworld, they have two more CARSTAR Weekly Racing series races on Sept. 18 and Sept. 25. Green Flag flies at 7 p.m. for both races.

More information can be found at www.ScotiaSpeedworld.com. 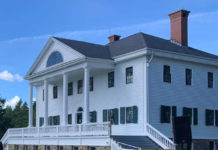