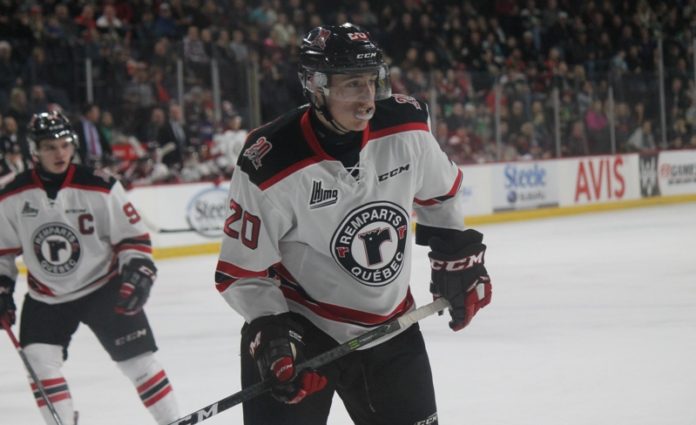 SCOTIABANK CENTRE: Andrew Coxhead must have felt like he was a rock star Nov. 24 leaving the Quebec Remparts dressing room.

As the Fall River product carried his gear bag to the awaiting team bus inside Scotiabank Centre in Halifax after their 6-5 shootout victory Thursday night over the hometown Mooseheads, a chorus of “Coxhead! Coxhead! Coxhead!” chants and a big applause greeted him from the many friends and family members who gathered to see him as he appeared.

“It was a lot of fun,” Coxhead told The Laker about playing before family and friends in a post-game interview. “I really enjoyed the experience. It was nice to have all of my friends here to watch.

“It was pretty amazing (to hear the cheers when his name was announced in pre-game on the scoreboard). We have my best friends here. It was pretty fun.”“

In the game against the Mooseheads, he was two-for-five in the faceoff circle during the game, where he started the game aligned with Jeremy Laframboise and Jesse Sutton.

He talked about the atmosphere in the game against the Mooseheads, a team he grew up cheering for.

“It’s always a good atmosphere out there,” he said. “It means a lot to me (pointing around to the horde of people who came to watch). These people mean a lot to me.”

In a previous interview, Coxhead said he had nerves about the game. By the second shift of five he had in the first period—one filled with penalties for Quebec—he said they were all gone.

Pictures: Cooper Jones of the Halifax Mooseheads finishes a check on Andrew Coxhead of Fall River during the game Nov. 24 in Halifax. (Healey photos) 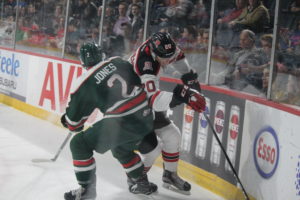 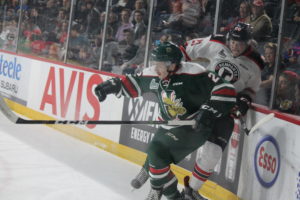 Besides playing with the Remparts, Coxhead and his Team Canada Black teammates captured silver at the World Under-17 hockey championship, held in late October. Team Canada Black fell 2-1 to Sweden in the gold medal championship. He picked up one assist in six games played. He also had two penalty minutes.

He knew the win against the Mooseheads was a big two points, with four more up for grabs on the teams three games in three nights swing through the Maritimes.

“It was a big win. The Moose have a good team and they score a lot of goals,” said Coxhead. “It was nice to come out on top.

“It should be a good weekend. Hopefully we can win the two that we have left.”

The Remparts fell in Saint John to the Sea Dogs 4-2 on Nov. 25, but in the final game of their three games in three night swing through the Maritimes on Nov. 26, they managed a point in a 3-2 overtime loss to the Charlottetown Islanders. Coxhead scored a goal in the contest in P.E.I. They leave the Maritimes with three of a possible six points.