ELMSDALE: For the past five years, Kate Friars ate, breathed, and slept with nothing but the East Hants Aquatics Centre in Elmsdale on her mind.

At the $19-million-dollar facilities grand opening on Sept. 18 in Elmsdale, Friars was one of the more poignant speakers among the dignitaries that included Kings-Hants MP Kody Blois, and Municipality of East Hants (MEH) Warden Jim Smith. The Government of Canada contributed $5.8 million with the Municipality of East Hants providing $13.2 million. CAO Kim Ramsay was the Emcee.

Friars, the Deputy CAO and former Parks and Recreation director for the MEH, was emotional when she spoke about the time since the project went from an idea to on paper in 2015.

“It’s really difficult to explain how you live and breathe a project for about five years, from ideas and comments from the community about a new facility, what that would look like, what it should be, and all the council meetings about where it should be,” said Kate Friars. “This project has been my life. My passion, since 2015.”

She came to East Hants in 2014 she saw the need to have a focus on the community with services that would untie the community, help them be physically active, and make sure we could celebrate things that made sense to people.

She became teary eyed on the opening of the splash pad, adjacent to the Aquatic Centre.

“I became teary eyed because all I could hear was squeals of laughter and kids getting wet,” said Friars. “That is what I have done is make people happy and I focused on bringing that vision to fruition.

Friars said there were many others behind the scenes that helped her make the day become a reality.

“I couldn’t have done it without all of the help from the people with the Municipality of East Hants, there are so many staff that have their fingerprint on this.

“We needed everybody’s help to get this done.”

The following items are included in the aquatic centre:

Blois said he was pleased to be at the grand opening of the Aquatic Centre and thanked MEH councillors for their leadership on the project. His predecessor Scott Brison did much of the work in garnering federal support to fund the project.

“What a beautiful facility we have here that will be an absolute legacy for our community,” said Blois.

In a post-announcement interview and while masked and socially distancing, Blois spoke to The Laker News about what the day meant for the opening of the new pool.

“The legacy that this facility will mean to the community is going to be felt for years ahead,” he said. “As someone who was heavily involved in the sports and recreation community here in East Hants, to see a brand-new facility that will serve generations to come is exciting.”

Blois said the government he is part of has made infrastructure a priority, something he is proud of.

“When people can see the investment that we’re making in the community, I think it’s important, for the economy, but also health and social outcomes as well.”

Warden Jim Smith said the opening was a good day in East Hants.

“It’s a vision come true,” he said in a post-announcement interview. “It’s been a long time in the making. It’s something that’s a legacy for me for the residents of East Hants to enjoy for the next 50 to 75 years.”

He spoke of how Friars managed to bring the project under budget, something that is a rarity in the world with projects of this magnitude.

“Kate and her team worked relentlessly to ensure that this came in on budget,” said Smith. “Council had stated it was not to go over one cent more, and when it came back to me I reiterated council’s wish. Kate made it happen.”

The aquatic centre was designed by an integrated design team led by MacLennan Jaunkalns Miller Architects in association with TEAL Architects+Planners. Bird Construction led the construction of a facility that is a leader in accessibility, quality, and energy efficiency.

It is designed so that toddlers, children, seniors and people of all ages and abilities can enjoy it. It will host a variety of aquatic and non-aquatic programs and be a hub for the community, all contributing to the social, physical and community well-being of residents of East Hants.

Friars said the facility is impeccable and well-built.

“I want to say thanks to municipal council in believing in this, believing in the organization that we could deliver it,” Friars said. “We want to be able to do this type of project again in our community.” 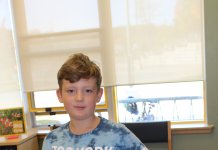 Impaired driver call turns out not to be