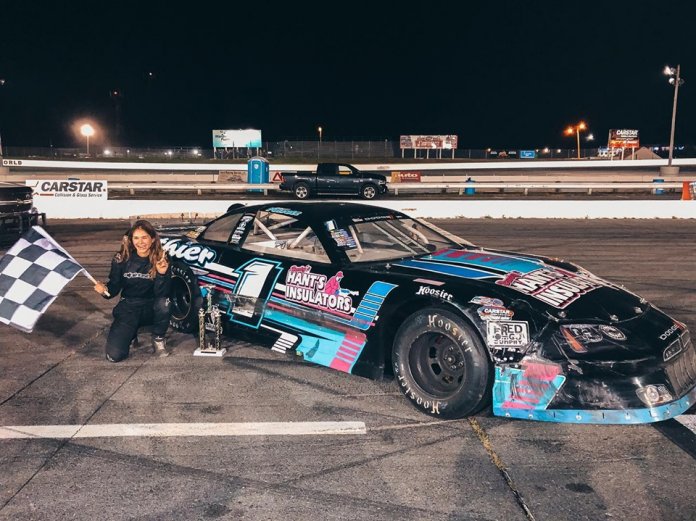 SCOTIA SPEEDWORLD: Megan Parrott began what was expected to be a few busy days on a high after capturing the Sporsman feature race on Fleet Brake Atlantic Night at Scotia Speedworld on Sept. 6.

Parrott, a line-woman with N.S. Power, held off the 18 of Harry Ross White of Upper Kennetcook and Travis Roma, to pick up the checkered flag during the final race of the CARSTAR Weekly Racing Series’ penultimate race night at the track across from Halifax Stanfield Airport.

The Beaver Bank driver was in the zone as she brought home the Number One Racing hot rod in first. HOSS was second, also part of the Number One Race family. It is usually driven by Bernie (no last name given).

Hoss took a heat race win earlier in the night.

In the Lightning class, the 141 of Rational Richard maintained his 60-plus point lead in the points with one race to go with a second place finish. Chevy MacDonald of Stewiacke was fourth in the race.

Gage Gilby of Lantz came home in second, ahead of Ayden Christenson of Windsor Junction in Bandit bandolero. Chase MacKay won the race.

Dawson Noble of Nine Mile River was fourth in the feature race when the checkered flag flew.

Colton Noble, Dawson’s brother, was runner-up to Danny Chisholm in the Outlaw bandolero feature. Nate Singer of Kennetcook drove the no. 81 to victory in the lone heat race.