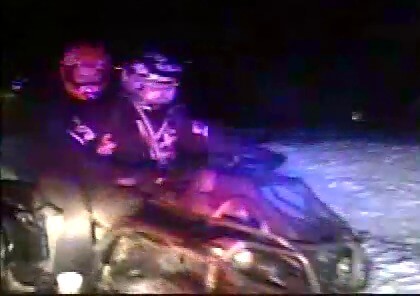 BEAVER BANK: Halifax District RCMP are seeking the public’s assistance to identify two suspects of interest in an incident involving an ATV hitting an RCMP car and then fleeing police in Beaver Bank.

In a release, RCMP said that on Jan. 16 at 4:25 a.m. an officer was driving on Beaver Bank Road in Beaver Bank when a black outlander ATV with two passengers passed him with no headlights. The officer activated his emergency lights to alert other motorists and the ATV fled.

A short time later, the officer was driving on Beaver Bank Rd. and saw the same ATV at a stop sign on Woodbine Dr.

“As the officer approached, the ATV started and headed towards the police car,” the release said. “The officer turned to block the road and the ATV sped up and struck the front right of the police car.”

The ATV then went into the snowed shoulder of the road to get around the police car and left at a high rate of speed on Beaver Bank Rd. No one was injured during the incident.

Police say the ATV is described as a black Can Am Outlander ATV with the radiator relocated onto the front rack and the two passengers were wearing black with one person wearing a red helmet.

Anyone with information on this incident is asked to contact Halifax District RCMP at 902-490-5020.

HRM announces traffic delays for Hwy 2 Waverley on May 24