WINDSOR JUNCTION: Residents of a subdivision in Fall River Village were forced to travel almost 40 minutes round-trip to get their mail recently after their community mailboxes was deemed unsafe.

Canada Post taped off and blocked access to the community mailbox on Winley Drive, leaving a notice to residents that due to the structure being deemed unsafe they would have to pickup their mail in Enfield.

Many were not happy at having to drive well outside their community to get their mail, and work began between resident Jay Cameron and Canada Post to see if the mail could be redirected to either the postal outlet at Shoppers in Fall River or the post office in Waverley.

MP Darrell Samson was also made aware and began working to see what he could do, given Canada Post is a federal government entity.

In a letter to residents, Samson said the gazebo covering the community mailboxes was built some 25 years ago by a now defunct homeowners association.

“Although Canada Post does not own the structure, they have asked for an emergency order to remove it so they can resume mail delivery as soon as possible,” said Samson in the letter.

He said Canada Post was going to remove the structure at its own cost.

“Although they will not build a new gazebo, the community may wish to undertake that in the future,” he said. “Canada Post has also advised us that new mailboxes with improved parcel compartments are planned for the fall of this year.”

Samson is also impacted by the stoppage of mail delivery at the location.

“I certainly understand the inconvenience and am working to get it resolved as quickly as possible,” he said.

The structure was down by the end of day Aug. 21, and has since been inspected. It is now open for mail delivery to resume. 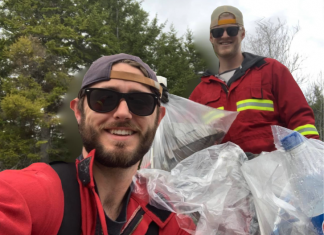 Pat Healey - May 27, 2020
FALL RIVER:  Instead of sitting at home being bored and so they had structure during the COVID19 shutdown, two Fall River brothers...