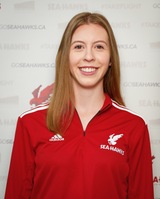 Claire Langille, who just finished her first season with the Memorial Sea Hawks women’s soccer team, was selected to the U Sports All-Rookie team for her freshman year performance.

Langille notched four goals and five points in 12 games played with Memorial this past year. She had 20 shots on goal for the Sea Hawks.

Memorial was the top team in the regular season, but St. F.X. defeated them in penalty kicks in the playoffs semi-final game to eliminate them.