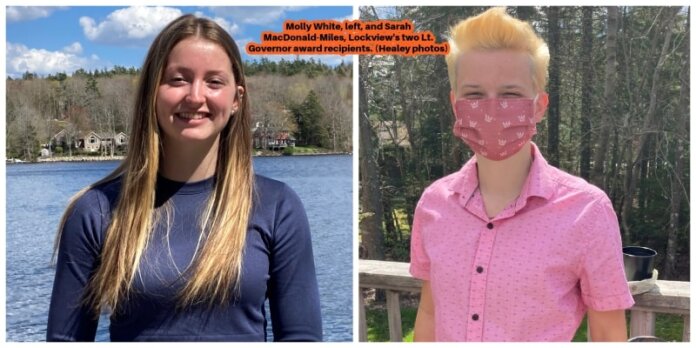 Molly White and Sarah MacDonald-Miles were announced at the school (before the COVID-19 shutdown) as the winners chosen from the school.

Students are nominated by their school based on academic performance and qualities of leadership and service demonstrated in their school and community. It is open to all Grade 11 students.

MacDonald-Miles, who runs the social entrepreneur business Links of Love giving back to other non-profit organizations, is also involved in Cadets. She congratulated White on winning.

“It was really good to see the amount of people who were nominated,” said MacDonald-Miles on May 14. “It’s crazy that they nominated me. It’s amazing that the school recognizes me and Molly out of 1,000 students.”

She explained it means a lot.

“My big thing isn’t about the recognition but about what you’ve done for the recognition,” she said. “Links of Love has helped with a lot of that. It’s amazing to win it and have it and say I won that.

“I love the fact that everything I have done has gone toward the award.”

MacDonald-Miles said she was shocked when she heard her name called at school.

“I got a couple text messages from my friends saying congrats,” she said. “I was smiling and happy. I was trying to be humbled about it.”

She said the award isn’t all about your marks, but what you’re doing in the school and in your community.

White said there were a lot of great candidates at LHS.

“I feel kind of special having been chosen,’ said White in a socially-distance interview next to Lake Fletcher mid-day on May 14. “I think it’s really cool now that I can go back to those who helped me along the way and thank them by telling them this was made possible because of what they did for me, so thank you.”

She said she had a free period the morning they announced her and MacDonald-Miles as the recipients, so she was at home.

“A couple of my friends texted me asking if that was for the award (her name being called out),” said White. “I was like “is what for the award?” They said they called me for the award.

White and her mom do street cleanups along Lockview Road; volunteers her time with various groups; and is in a leadership role with her sports teams, including her volleyball club team.

“I put a bunch of things in my application that really show who I am,” said White.

She said her friends were proud of her for winning the award.

“I think it’s a great representation of who I am, so when you’re applying for work or university, they can’t meet you right now with COVID-19, so this tells them a bit of the person I am,” said White. “I’m really grateful. It’s a great feeling.”