BATHURST, N.B.: Liam Kidney is on his way to Quebec.

After a short stint in Bathurst, N.B. with the Acadie Bathurst Titan after a trade from Cape Breton, the Enfield product has been dealt to the Drummondville Voltigeurs.

Kidney, in his final QMJHL age-eligible season, was playing with younger brother Riley in Bathurst.

He had been dealt to the Titan from the Eagles for a fifth round pick in 2023 in August.

In the more recent deal, Kidney was sent to Drummondville for a seventh round pick.

In his limited game playing time with the Titan, Kidney had four goals in 10 games played. He had 13 penalty minutes in a checking/energy type role and 20 shots on goal. 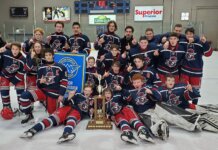