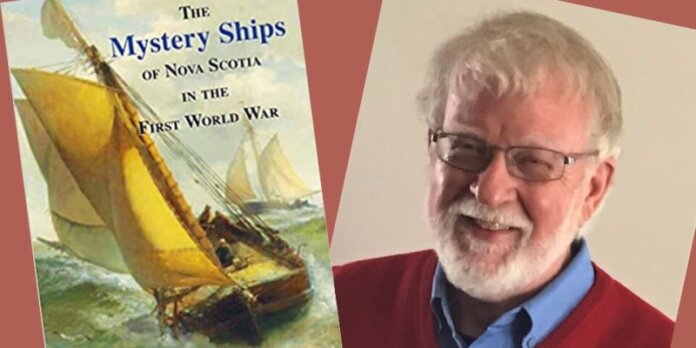 EAST HANTS: Hidden on a side road straddling the Halifax and East Hants County line lives John N. Grant, an historian well-known and respected in his field, both in history and in genealogy.

The retired university professor has several books to his credit. Three of the most recent publications focus on school history and one provides details on ships patrolling Maritime waters during the First World War, ships that never existed according to the Canadian government.

One might say A History of Oldfield Consolidated School 1962-2017 hits close to home. In fact, it’s very near where Grant lives. The 50-page booklet tells the story of how in 1962 the school sections of Goffs (Guysborough Road), Oakfield, Oldham and Enfield Border were dissolved and Oldfield Consolidated School was constructed. Grant includes additional history on these school areas from 1820 to 2017.

His next project is similar as it involves school history in Nova Scotia, but different in the way it is delivered: through the eyes of Mary Kaulbach, a young woman who attended the Normal School in Truro during the 1892-1893 school year.

Grant wrote, “I first heard about Mary Kaulbach when, as a member of the Board of the Little White Schoolhouse Museum in Truro, we were informed that her diary and some other papers had been donated to the museum.”

Mary was one of eight children born to Francis and Elizabeth Fancy Kaulbach of Conquerall Mills, Lunenburg County, NS. She was born May 22, 1874, on the family farm. Just before the school year began, she started a diary. More than a century later, the diary began a second life.

“Melanie Ballard prepared a typescript of the manuscript which I borrowed,” wrote Grant. “After reading it, I approached Melanie and we started the job of editing it.” The following year, in 2021, Mary Kaulbach’s Normal School Diary 1892–1893 was published by the Little White School House Museum.

The third book on the history of schools is a doozie, weighing in at 350 pages. Grant, who was born in Antigonish, grew up in Guysborough County. Over the years, he’s researched the schools in the county and compiled a large file containing everything from list of teachers, where and when schools were built, class photos and anecdotes from former students and staff.

Schooling in Guysborough County 1735-2016 – A Case Study of Public Education in Rural Nova Scotia was published by Guysborough Historical Society. It is the most extensive collection of history on the schools in the county.

Grant wrote, “The history of schooling reflects the impact of economic, political, military and other social forces on the local community.” It’s history spans 300 years. He adds, “In 1735, there was one school in the County; in 1959, there were almost one hundred; in 2018, there were three. This is the story of what happened in between.”

Grant was inspired to write this history book because of his connection with the county and because, “I was one of a family of teachers. My mother, brother, sister and I were all involved in schooling.” He and his teacher brother lamented over “the absence of any modern historical work on the subject in Guysborough County. We started with the idea of writing a paper on the history of schools in the Guysborough area but it grew into this book covering the whole county.”

Grant’s connection to Guysborough County led to another book on a topic shrouded in mystery: The Mystery Ships of the First World War.

He wrote, “I first heard of the existence of the mystery ships in the fall of 1970. I was the historical-consultant to the Sherbrooke restoration Commission. As such, I interviewed some of the older residents of the Sherbrooke area and one of them was Captain Byron Scott (1883-1972) who had been in command of the armed fishing schooner, the Dorothy G. Snow in the summer of 1917.”

When he contacted the Department of Defense, they told him, “Scott was wrong and that the Canadian government did not employ decoys or mystery ships, and the British vessels of that type were only used in the eastern Atlantic.” This was partly true.

Grant wrote, “The Canadian navy did not have mystery ships but the British did and in the summer of 1917, they had six secretly operating in Canadian and Newfoundland waters.”

For Grant, this story remained with him and he added to it over the years. He adds, “It is an intriguing story and dangerously close to being forgotten. When I retired, I decided that it was now or never for me to tell this story, and I was delighted when Breton Books published it.”

Though retired, Grant has several projects on the go, including research on the history of the Nova Scotia Teachers College, which was closed in 1997.

Additional information on all three books concerning school history can be found at Quarter Castle Publishing (https://quartercastlepublishing.com). A History of Oldfield Consolidated School 1962-2017 has recently been released as an eBook at Amazon (https://www.amazon.ca/dp/B0B3YVZP7P).  The Mystery Ships of Nova Scotia in the First World War is available at Cape Breton Books (https://capebretonbooks.com/products/the-mystery-ships-of-nova-scotia-in-the-first-world-war).