WINDSOR JUNCTION: Cathy MacKenzie can check writing a novel off her bucket list.

The author, who lives in Fall River Village near Windsor Junction, has just penned and published her first-ever novel, “Wolves Don’t Knock.”

MacKenzie has written more than 250 short stories and lots of poetry, but never a novel. Until now. It had always been a dream of hers to have one published. The writing began in 2014.

“It evolved from short stories into a novel,” said MacKenzie. “It kept going up and up for the word counts, so it’s a full fledged novel now.

“It was always my dream to write a novel, but I never thought I would do it. Now that it’s done, I’m pretty amazed.”

It tells the story of 16-year-old Miranda who escapes from her abductor and the wolves that have tormented her soul for six long years. She returns to her childhood home where her mother, Sharon, caring for Miranda’s son, Kevin, has feared for her daughter’s fate. Uncertainty and distrust taint the first year after Miranda’s return.

Miranda and Sharon hide secrets they dare not reveal while constantly wondering when Miranda’s kidnapper will reappear. Can mother and daughter bury their demons and repair their strained relationship? Can Miranda bond with the baby she never knew and find the love she so desperately wants? Will Kevin’s father play a role? Will Sharon find the answers she needs to recover from her own troubled past?

Although “Wolves Don’t Knock”, which was released in July, deals with sensitive issues, there are no graphic sexual scenes, said MacKenzie.

“For the year that Miranda is back home, both she and her mom are looking over their shoulders wondering when the kidnapper will appear as he has yet to be caught,” explained MacKenzie.

The novel has had some readers not be able to put it down because of how suspenseful it is.

She said so far everyone she has talked to has liked it.

“I’ve had really good reviews of it on Amazon,” said MacKenzie.

MacKenzie said the two short stories she wrote made the novel become what it is.

“It sort of just wrote itself,” she said. “I just sat at the computer and the words just seemed to come.”

“Wolves Don’t Knock” is available through Amazon.ca, through MacKenzie locally by email at writingwicket@gmail.com and MacKenzie hopes it will soon be at stores like Chapters and Indigo. They’re $15 each from her.

Check out her website for more of her writings at: https://writingwicket.wordpress.com/ . 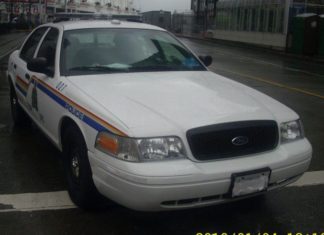