SHUBENACADIE: A single-vehicle crash into a power-pole in the Shubenacadie area turned into more than a simple accident for the driver.

East Hants RCMP responded to the collision on Oct. 17, finding a truck that had hit a power-pole upon their arrival.

At the scene, the 23-year-old man exhibited signs of intoxication and was taken to the detachment in Enfield, where samples of his breath were taken to verify his intoxication, said S/Sgt. Cory Bushell.

The man was charged with impaired driving. 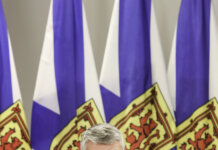