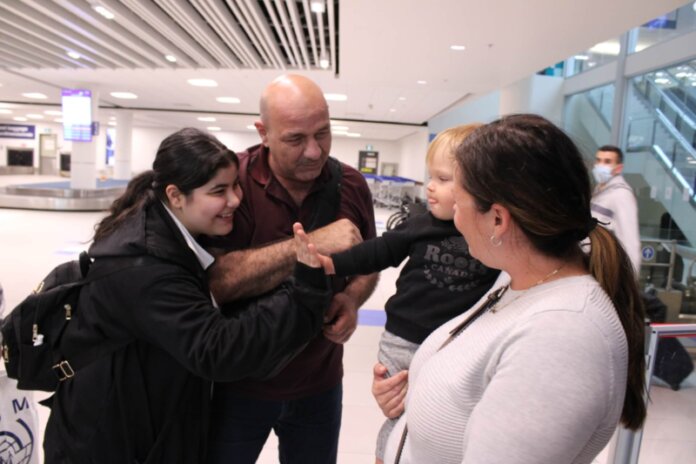 HALIFAX STANFIELD: The smiles were as wide as could be seen as the Alshaikhali walked through the security gates, to the welcoming arms of members of the HEART Society, and their new home in Nova Scotia.

The Alshaikhali’s came to Canada from Indonesia. The daughter and one son are going to Hants East Rural High, while the other son is attending Riverside Education Centre in Milford.

Newfound friends were on hand with signs—even one was done in Arabic, their native language, and Hants East MLA John A. MacDonald was there with a Nova Scotia flag to give to the family.

A mother and son were there with a Canadian flag proudly showing it as they waited patiently for the sight of the family coming down the stairs in the domestic arrivals area.

After a few minutes, Mohammed agreed to answer questions from us, through an interpreter.

While he said he did feel confused after just arriving, he was smiling and pleased to be at their new home.

He was surprised at the welcome the family received.

“It’s as if all of them feel like family already,” he said. “I’m very happy to see all of those who were here and the way they welcomed us.”

The HEART Society found the family on a list provided to them by the federal government. The list is of refugees waiting to find a new home because they couldn’t return to where they came from as it was unsafe.

The volunteer group looked at the list and thought the family would be a good fit for the community so decided to sponsor them. It took just four months from start to the family arriving.

For the Alshaikhali family though, it’s been a long wait for this day.

The three teen kids were getting ready to head to school. Hurricane Fiona delayed their start until this week.

“They’re looking forward to making new friends at their schools,” he said.

With a few weeks since arriving under their belts, hopefully East Hants residents have been able to give them a warm welcome.