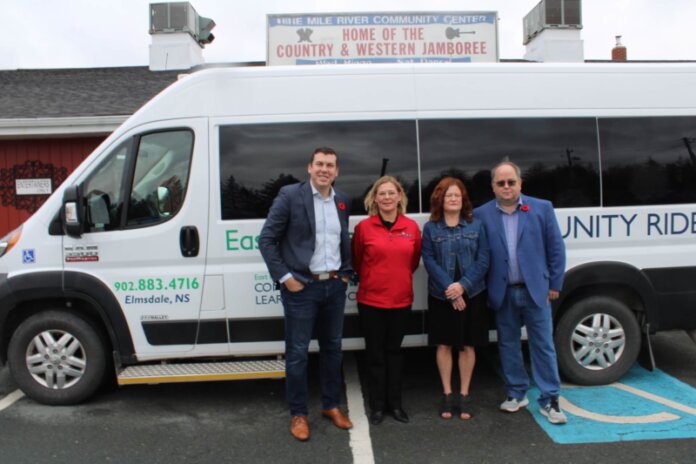 NINE MILE RIVER: East Hants Community Rider is adding to its fleet of vehicles, helping to expand its service in the Municipality of East Hants and nearby HRM communities.

At a press conference on Nov. 7 in Nine Mile River, Kings Hants MP Kody Blois announced the federal government was investing $154,096 into the project through the Rural Transit Solutions Fund.

Hants East MLA John A. MacDonald was also on hand as he announced Nova Scotia was also making an investment to the tune of $38,524.

VIDEO: here is the video story, sponsored by Leno’s Stop Shop, of the announcement made at the Nine Mile River Community Centre:

She said the new vehicles will provide residents with affordable and comfortable transit options to get around their communities and access programs and services.

“These new vehicles will enhance our fleet, reduce operating costs, move us toward a greener operation, and most importantly, get more people where they need to go,’ said Burke to the small crowd on hand at the announcement done under light rain/overcast skies in rural East Hants.

Members of the Municipality of East Hants council were also present for the announcmenet.

MacDonald said that every community deserves access to affordable and reliable transit.

“We have a responsibility to deliver this service in the greenest way possible,” he said. “We know that one size does not fit all.

“That’s why I’m proud we as a government have been able to find solutions to transportation
problems that make sense for this community.”