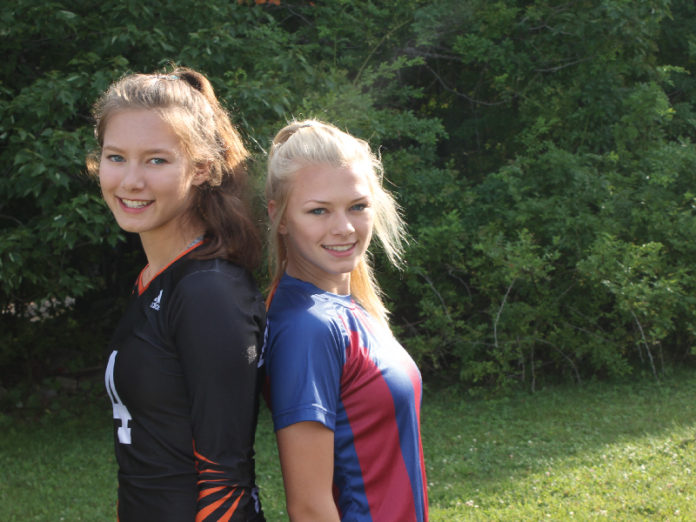 WAVERLEY: If you didn’t know the story behind Kamryn and Kenzie Brimicombe, one would be unaware of the daily pain they fight through to play the sports they love.

Kamryn suits up on the soccer pitch with Suburban FC, while Kenzie plays her trade on the beach and indoor volleyball court with the Fall River Fury, representing N.S. at the recently held Atlantics and at the national beach volleyball championships.

The two sisters from Waverley—who have family living in Shubenacadie—both have Ehlers Danlos Syndrome (EDS). EDS is a collection of inheritable connective tissue disorders. The two inherited it from their mom, Shelly.

But that hasn’t stopped either Kamryn or Kenzie from being active and a team player when it comes to their sports.

“We’re just playing sports, and sure it hurts sometimes, but we do it because we love the sports,” said Kamryn, who also plays on the provincial soccer team. “It’s all worth it in the end.

EDS affects the sisters by giving them dislocations in knees, fingers, and their ankles. For Kenzie, her fingers bend backwards and dislocate a lot as she sets the ball.

For Kamryn, her knees have become dislocated as she is playing soccer. She also plays club volleyball.

“I would have to stop sometimes in the middle of a game and put it back in place,” she said.

The two have become accustom to their dislocations and pain from EDS, so they just as they say roll with it.

“We’ve grown up with it so when it happens it’s just an every day thing, something we’re used to,” said Kamryn. “Before, it was hard because we weren’t used to it. We just go with it now.”

Kenzie said they push through the pain they experience for the good of the team.

“We both play sports that are team sports,” she said. “We’re all in in together. If we don’t push through, we feel like we’re letting our girls and teammates down. I just keep going.”
Kamryn said all the girls she plays with she’s grown up with and they understand her issue, and are supportive of her even when she pushes too much.

“My coach tells me to take a rest when he sees that I need to. My teammates were shocked when they first found out, but now they’re supportive,” added Kenzie.

The two were told by their doctors at a young age they wouldn’t be able to participate in sports their whole lives. So far, Kamryn and Kenzie are proving that statement wrong.

“They told Kenzie she wouldn’t be able to do it past age 14, and she’s still going strong,” said Kamryn.

“For me volleyball is my whole life. I spend six days a week practicing and playing it, and now I’m coaching too,” said Kenzie.

Kamryn said since they were born with EDS, they know no other way to overcome and live their life with it than what they are.

“We haven’t learned any other way to deal with it,” she said. “It’s our normal.”

And while the two battle their opponents on the soccer field and volleyball courts with their teams, their biggest opposition most of the time is their own bodies.

“It’s our life,” said Kenzie with a chuckle.

And from the sounds of it, a life neither would give up.