TRURO: The East Hants Junior Penguins will begin their quest for the NSJHL championship with the first two games in Truro.

East Hants will be entertaining the Kameron Miners in the championship final.

Game three and four will be held at the rink in Membertou with game three set for an 8 p.m. puck drop and game four at 3:30 p.m.

The Laker News is the sponsor for the Pens livestream of Game two and three on their Facebook page. 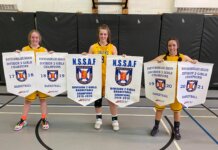