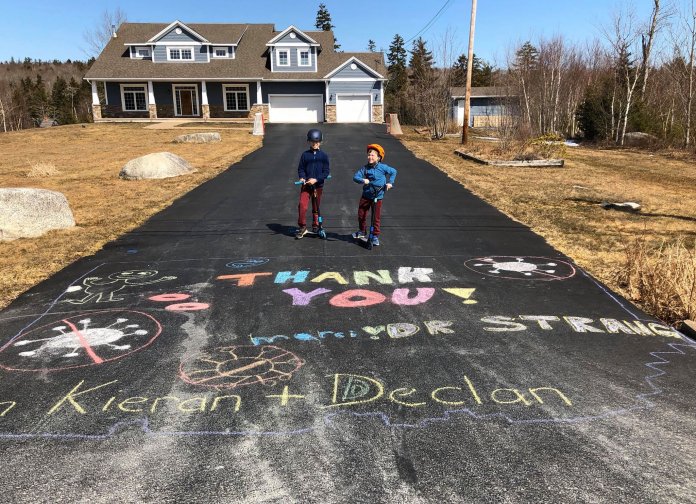 FALL RIVER: Nova Scotia’s Chief Medical Officer of Health is getting plenty of praise across the province for his handling of the COVID19 pandemic, but none more close-to-the heart than that of his home community.

In the Fall River neighbourhood that Dr. Strang and his family call home, the lawns of many homes throughout the area are littered with “Thank You” signs and messages written in chalk on the driveways of neighbours.

The idea came about after Jacquie Cohen saw Dr. Strang walking by. The idea was a winner with Cohen’s two kids, Kieran and Declan, aged nine and seven.

“We see Dr. Strang regularly walk through our neighbourhood almost daily,” said Cohen. “And yesterday afternoon as I saw him walk by, I thought this would be a great way to show our appreciation for all he is doing for Nova Scotia.”

Dr. Strang is leading the way as N.S. enacts measures that will help in the fight against COVID19.

“We are way ahead of so much of the world, including many other provinces, and he is to thank for being so proactive in this crisis,” said Cohen.

Kieran and Declan saw the video of Dr. Strang answering questions about why they can’t go to school or play with their friends.

“They found it reassuring that this man, that they recognized from our neighbourhood, was playing such an active role in keeping them safe,” she said. “They loved the idea of thanking him for “getting rid of the corona.”

“It’s so incredibly tough to make decisions that impact on people’s freedom and emotional and financial well-being,” said Cohen. “We want him to know that we appreciate his sacrifices (time with his own family included) for our province’s well-being.”