OAKFIELD: On one of the last days of summer, five Halifax-area youngsters took advantage of the hot summer sun to help raise money to bring a four-legged furry friend destined to be euthanized in Texas to Canada.

When Bailey and Ellie Nash and Sophia and Caiden MacDonald’s parents told them what their mothers friend was doing to save a dog, named Bueller, from high-kill shelter in Texas and bring him to Canada to live, the four knew how they could help out. They setup a lemonade stand, complete with cookies, for those going and coming from Oakfield Park on Aug. 31.

“We’re raising money to help my mom’s friend bring home a dog from Texas,” said Bailey, taking a break from sales. “Someone in Texas has brought it into their home and my mom is raising money to bring it to Canada to find him a good home.”

The four, all from Halifax, hoped to raise $100. They doubled that and raised $200 in donations from those who stopped by their lemonade stand on Oakfield Park Road, just after the one-lane bridge. They are the nieces and nephews of Oakfield resident Darrell MacLean, a volunteer firefighter with Station 42 Wellington.

Sales were steady at the lemonade stand, said Caiden, six.

Bailey, 8, explained why the four wanted to setup the fundraiser near Oakfield Park on the hot sunny day.

“It’s my mom’s friend and I love animals,” said Bailey, who has a cat.

Caiden said the four kids friends and parents are thrilled at what they’re doing.

“The shelter we’re going to go to has more than 100 cats and lots and lots of dogs,” added Bailey. “We want to help the animals out.” 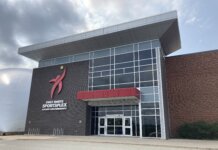